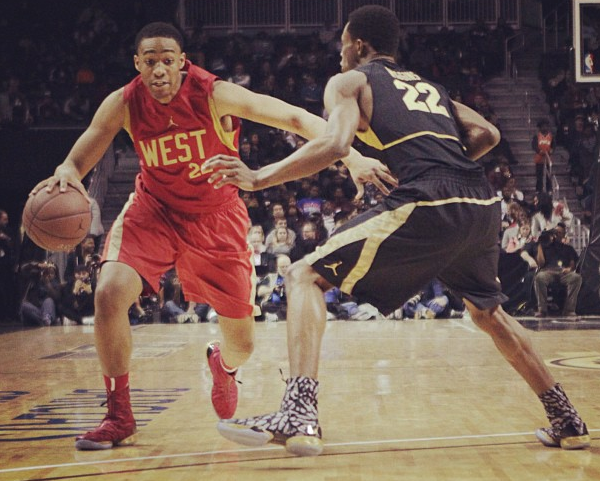 Simeon's Jabari Parker goes to his right against Andrew Wiggins, the No. 1 player in the Class of 2013. The Jordan Brand Classic was played at Brooklyn's Barclays Center Saturday night.

The Jordan Brand Classic on Saturday night made its highly-anticipated debut at Brooklyn’s Barclays Center with 22 of the top basketball players in the Class of 2013 in tow — and a level of pageantry previously unseen in a high school basketball all-star game.

Nigel Williams-Goss led all West scorers with 17 to lead in a 102-98 victory. Andrew Wiggins and Julius Randle (Dallas, Tex./Kentucky) each had 19 for the East team.

Nigel Williams-Goss (Henderson, Nev./Washington) completed a three-point play to put the West ahead 99-96 with 28 seconds remaining, then drained both ends of a one-and-one to seal the contest.

As expected, the game’s marketing appeal took on a life of its own as a result of its relocation to Brooklyn. Celebrities in attendance included Spike Lee, Yankees pitcher CC Sabathia, Lala Vasquez, Joe Budden and Carmelo Anthony.

“After spending two great years at Charlotte’s Time Warner Cable Arena, we decided to bring the Jordan Brand Classic to Brooklyn at Barclays Center,â€ said Larry Miller, President of Jordan Brand. “We are extremely excited to host this incredible talent in a borough famous for high school basketball.â€

“Brooklyn has been the home of many of the greatest-ever high school basketball players in the country, so it’s only fitting for Barclays Center to host the nation’s best high school all-star game,â€ Barclays Center CEO Brett Yormark said. “We are proud to welcome the Jordan Brand Classic to Brooklyn and look forward to watching the future stars of the sport.â€

As it were, two of the biggest stars of the night — the consensus No. 1 player of the Class of 2013, Andrew Wiggins and the rapper Drake — were from Toronto. And there was every indication that their presence was groundbreaking; Drake, whose performance fee has been reported between half and three-quarters of a million dollars, performed a 15-minute medley of his hits before a crowd which at its height appeared a bit more than three-fourths full. The Barclays Center did not release an official attendance figure.

There was, however, muted speculation about the possibility that Wiggins, who is still undecided on where he’ll attend college next year, might skip college altogether and attach himself to a new sports agent with outsized influence in the building.

At any rate, hundreds of tickets were donated to local community organizations, schools and non-profits. A Living Social deal gave ticket buyers the option of spending as little as $9 for a 100-level ticket and t-shirt.

Michael Jordan was in attendance, too.

When he appeared on the suite level, the crowd below him went into a frenzy.

It was also the first classic back for Jordan Brand President Larry Miller since he returned to the company last summer, replacing Keith Houlemard who left to head up Nike’s Olympic division. Miller made good on a promise he made back in December to make a sizable donation to the Red Hook Initiative, a non-profit in Red Hook, Brooklyn, a community devastated by Hurricane Sandy.

Select players from the Jordan game were scheduled to play the Nike Hoops Summit on Saturday, April 20 at the Rose Garden in Portland, Ore.