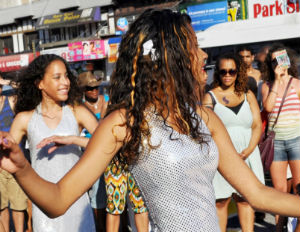 Art exhibitions, film screenings, rum tastings, cultural performances, and culinary presentations, are just a few reasons why you should join The 3rd Annual Afro-LatinoÂ Festival of New York, from Friday, July 10 thru Sunday, July 12. The festival celebrates the contributions that people of African, Latin-American and Caribbean cultures have made to New York City and the world as a whole.

On Friday the festival kicks off in Harlem, N.Y.,Â with a cocktail reception, an awards presentation, a digital empowerment session, and several performances, then on Saturday the festival moves to Bushwick, Brooklyn, to host a series of AfrolatinTalks. The festival makes it’s final debut on Sunday in Brooklyn with a street fair and live concerts.

With a diverse mix of performers, community leaders and entrepreneurs presenting a unique showcase of cultural activities, the event will also highlight the work, values and issues important to the Afro-Latino community through various mediums, such as Afrolatinos TV: The Untaught Story and ‘Representations in the International Decade of Afro-Descendants: Media, Cultural Tourism, and Census.’

The festival commemorates the International Decade for People of African Descent, declared by the U.N (2015-2024) and its principles of “justice,” “recognition” and “development.” According to the website, the mission of the annual festival is to provide a networking space to pay tribute to the African roots of people from Latin America and the Caribbean.

7 Quick Tips for Starting Your Company Off Strong