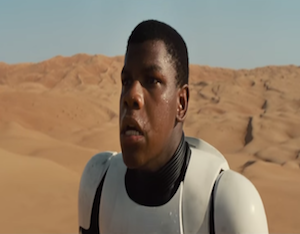 In a galaxy, far, far away, John Boyega has awaken the masses as director J.J. Abrams finally releases the latest Star Wars: The Force Awakens trailer after weeks of hype.

Opening in little more than a year, the upcoming tale of the Skywalker family saga has returned and seems to be worth all the hoopla. The teaser trailer—which premiered at selected U.S. theaters over the weekend — only gives the audience quick glimpses of what millions can expect in Abrams’s entry into George Lucas’s epic space opera. The science fiction drama is reportedly set 30 years after the fall of the Empire and Darth Vader, and follows a trio of young leads–presumably led by John Boyega (Attack the Block, newcomer Daisy Ridley, and Adam Driver (HBO’s Girls).

In the actual teaser, which you can see below, Boyega’s character appears in the desert (possibly Tatooine?), wearing a Stormtroopers outfit. Another scene shows off a spinning, R2-D2-like robot frantically beeping, a 74-Z speeder bike from Return of the Jedi carrying Ridley, and Oscar Isaac (Inside Llewyn Davis) as an X-wing pilot for the Rebel Alliance.

Excitingly enough, there’s even a hint of a Sith Lord stumbling through the woods, wielding a crucifix lightsaber. Add to that, John William’s iconic score, the brand-spanking new Millennium Falcon, and a brief look at a major firefight between the Rebels and the Empire’s TIE fighters – and this has the makings of a true billion-dollar picture.

Now that it is out and able to be seen — what do you think?!