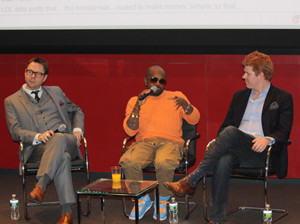 Most people don’t know the CEO of McDonald’s, but they do know Steve Jobs, said Jermaine Dupri, the Social Media Week 2012 keynote speaker, on Monday.

He believes that Jobs’ prominent role in Apple had a lot to do with the company’s meteoric rise to success. Similarly, Dupri, a Grammy Award-winning songwriter, rapper, and producer, believes that his high profile and hands on success in music will make him a social media superstar.

“We live in a world where you have to talk to the people buying the Filet-O-Fish.”People want to see…those guys who sit behind the desk.â€

Taking that into account, Dupri was inspired last year to start the social network Global 14, where his input takes center stage.

“Global 14 is a place and a home for people who have the same likes. It’s a little tunnel of people who are all marching in the same direction and I created a home for those people,â€ says Dupri. “It’s a place that is burning with activity.â€

What would a music heavyweight know about social media? Plenty.Â  Since it began in November 2011, Global 14 has generated some 33,000 subscribers and is built upon specialty communities. Using this hands-on approach, he posts photos, videos, and commentary daily surrounding trends he believes currently or will soon have a “cool factor.â€Â  Like Tom on MySpace, he follows everyone on the site.Â  The only difference is that the music mogul talks back– giving members feedback on their music, videos, and other posts.

Dupri wanted to create a site where it was easier for people to hold and continue a conversation over a length of time. He took issue with how a person’s stream of consciousness on Twitter could be broken up due in part to followers taking tweets out of context. He describes Facebook as a reunion place for friends and family; on the contrary, envisioned building a site where like-minded strangers could interact.