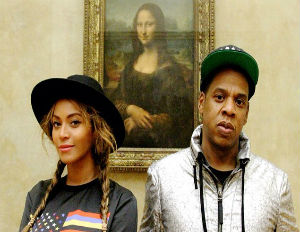 It seems that the litigations never stop when you’re an award-winning artist. Even worse when you’re of the Jay Z and BeyoncÃ© variety.

The celebrity power couple has been hit with an infringement suit stemming from a sample used on the duo’s “Drunk in Loveâ€ song. At the beginning of the song, listeners are treated to some lush and exotic vocals. Those sounds do not belong to BeyoncÃ© nor Jay Z, but are by a Hungarian artist by the name of Monika Juhasz Miczura. Better known around the world as Mitsou, the 42-year-old recording artist says that she never agreed for her vocals to be sampled for the Queen Bey / Jay Z duet.

She’s now asking for unspecified damages in a Manhattan Supreme Court in a suit filed late last week. It also demands an end to distribution of the song. “Mitsou never gave permission or consent, and never granted any of the Defendants permission, to use her voice for any purpose,â€ said the court documents, which also named Roc Nation producer Timbaland. The starting seconds of “Drunk in Love,â€ lifts Mitsou’s 1995 song “Bajba, Bajba PÃ©lemâ€ that appeared in Ando Drom’s album Kal Phirel o Del?.

According to the suit, the song was released in the United States in 1997 under the title “Gypsy Life on the Road.â€ Allegedly the sample was digitally manipulated with Mitsou’s voice comrising 29 percent of the track, which would go on to become a No. 1 hit on BeyoncÃ©’s album. “Drunk in Loveâ€ is reportedly about the sexual habits and relationships that go on between committed partners. “Mitsou’s incredible voice is widely considered unique and ethereal, and since the 1990’s, she has been in high demand for countless international collaborations as a featured guest singer,â€ the court documents add.

None of the Hungarian’s collaborators compare to the chart-topping dominance of BeyoncÃ©. Her out-of-the-blue, self-titled album has sold more than 5 million copies worldwide since it was released a year ago. Other accolades include that the album spawned countless applause from critics and became the fastest-selling album ever on iTunes.
Representatives for Roc Nation, BeyoncÃ© and Jay Z could not be reached for comment.