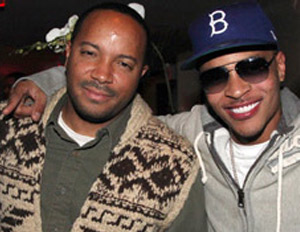 During the course of his career, Clifford “T.I.â€ Harris has had many ups and downs. Throughout it all, the man that has held everything together is the hip-hop star’s manager and business partner, Jason Geter. As the co-CEO of Grand Hustle, co-owner of AKOO Clothing, owner of the Strivers Row clothing line and Grand Hustle TV/Films as well as manager of several artists–hustle is all Geter knows. In the wake of T.I.’s successful reality show with wife Tameka “Tinyâ€ Harris, T.I. & Tiny: The Family Hustle, BlackEnterprise.com sat down with Geter to discuss how he got into the business, the difficulties he’s faced managing T.I.’s brand while he was incarcerated and what it takes to be a successful entrepreneur.

When did you realize you wanted to go into the business side of the music industry?

When I was really young. I grew up in New York so I was always around artists, seeing artists living in my neighborhood and coming through my neighborhood. I was always a fan of the culture. It was always something I loved naturally. When I was in 9th grade a guy came to my school and he was the A&R for Uptown Records. I didn’t know about that side of the business I just knew about the artist side. I heard his story and him saying you can make a good living doing what you love and not being an artist. It was intriguing. I started investigating and researching. Once I got my internship [at Arista Records] I definitely knew I wanted to be a part of the business. I said, “If people were making a good living doing what they love to do without coming to work in a suit, then I want to do that.â€ My mom was a part of corporate America so I saw the affect racism had on her–she was stressed. I knew I didn’t want to go down that lane.

So how did your relationship with T.I. form?

We met when he was 18-years-old and was just a rapper named T.I.P. living in his mother’s house. We went to the studio and put together a demo tape. I got him the first record deal. We’ve been together literally since before he was T.I. He had to change his name to T.I. [from T.I.P.] once he got the deal. There’s definitely loyalty with our friendship. We have a great relationship based on honesty.

Fast-forward some years later and you’re not only T.I.’s manager but also his business partner in several ventures in addition to your own. With your hand in so many pots, how do you keep it all together?

I multitask. Everything I do on that level is all relative to one another. Music, fashion, film… they’re all in the same realm. I don’t have to go too far out of my course of my direction to do either job in a sense. It all goes hand in hand. It definitely makes it a lot easier and it makes it more doable. It also helps that I love what I do. You got to love it or you’re not going to be able to do it. You’re not going to be successful at it because it’s so much work and so much time is taken out of your life. If you don’t love it you’re not going to be down to put that work in.

Is that philosophy a driving behind your clothing line Striver’s Row?

It’s a project that I’ve been working on for three years now. It’s an American heritage clothing line and history is definitely [something] we’re very influenced by. We study different moments in history and get inspiration for our collection. A lot of Black history is used to influence Striver’s Row. I’m proud to say I’m doing a collaboration with the movie Red Tails that’s coming up. I’ll actually be doing a Tuskegee Airmen collection. I make product out of US, Japan and Hong Kong. There’s stores in America, stores in Japan right now, I have my own shop in Atlanta. It’s a baby and it’s growing. It’s definitely exciting.

Do’s and Don’ts for the Pregnant Job Seeker

8 Days to Action: DAY 2, Invest in Resources That Massage Your Passion