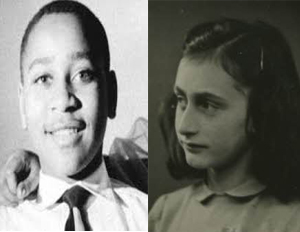 Janet Cohen, award-winning, Emmy-nominated journalist, writer and playwright, turned a moment of fury for one insensitive and vaguely uniformed acquaintance, into fuel for her dynamic and artistic play, “Anne and Emmett,” a fictional conversation between a teenage Anne Frank and Emmet Till, currently used to educate children around the globe.

One day in the midst of writing her memoir, From Rage and Reason: My Life in Two Americas, Cohen found herself explaining the book’s purpose during a ladies luncheon. When asked what the book entailed, Cohen spoke of the “two Americas,â€ in which she’d lived—one being apartheid Jim Crow and the other being a hopeful nation of promise.

Unexpectedly referred to as a “victimâ€ by a white woman during the conversation, Cohen then realized the profound historical and educational gap in awareness between black American and white American culture.

Cohen took this notion and expounded upon in it, in a way that birthed Cohen’s play “Anne & Emmettâ€—a fictional dialogue between Anne Frank and Emmett Till.

Cohn says this one-act play is an imaginary conversation between two victims of racial and religious intolerance, with parallel themes of injustice, murder, and hate; that she believes are extremely Â relevant and mirroring to todays repeat occurrences where death is Â a direct result of racial turmoil, and policing law enforcement.

“The ghost of Emmett Till lives on in cases like Freddie Gray, Amadou Diallo, Reika Boyd, Oscar Grant III, Manuel Loggins, Jr., Ronald Madison, Sean Bell, Eric Garner, Tamir Rice and Michael Brown–Black people across America, killed over the years at the hands of those who have pledged to ‘protect and serve,’â€ said Cohen who, is wife of former Secretary of Defense William S. Cohen, “This isn’t about a restoration of justice in America, as there has never been a balance in our criminal justice system, it’s about the absence of justice. While Anne and Emmett may be a part of our past, their stories are just as relevant today as ever.â€

Cohen pairs Â Anne, a then 15-year-old Jewish girl whose diary offered the world a gripping perspective of the Holocaust touching the hearts of humanity next to Emmett a 14-year-old African-American boy whose brutal murder in Mississippi sparked the modern civil rights movement side-by-side, in hope, that spectators young and old, black and white, are inspired and respond to her call to action.

Middle schools around the U.S and the world are currently using Cohen’s play to foster conversation among children and to educate them about the similarities between two different cultures.

This uplifting tribute and timely reminder, “Anne & Emmett,â€ is a powerful tribute to two teens who changed the course of history.

Tickets are on sale now for the production, which is playing atÂ MetroStage, 1201 North Royal Street, in Alexandria, Virginia.

Generation X, Not Generation Y Is Still Most Entrepreneurial Group