Behind The Growing Popularity of Jamba Juice 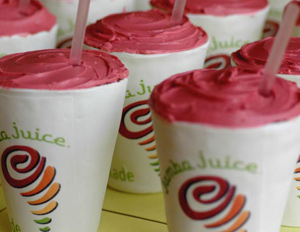 In the last 2 years, “wheatgrass detox” shots and protein shakes have become just as popular as Starbucks drinks. Jamba Juice has expanded to 809 stores globally and plans to open 60 to 80 more stores this year.

What’s behind this rapid growth?

Unlike most food and beverage related franchises, the typical Jamba Juice store is between 1,200 to 1,400 square feet in size, without seats or tables. Unlike a McDonalds or a Burger King, Jamba Juice storefronts are not built to be community hangout’s. Instead, the store is built to direct traffic to the counters and then out the door.

“Jamba Juices seem to be streamlined for efficiency,â€ Conrad Lyon, a senior equity analyst at B. Riley & Co told BusinessWeek. “In some locations, there literally might just be a bunch of blenders, and that’s it.â€

The stores require a minimal number of employes to work the register and operate the blenders that create the fruit smoothies that customers swear by.

Those fruit smoothies, which are the core product of the franchise, are also another key selling point behind the franchises success. Unlike complex recipes at Starbucks, it’s virtually impossible to mess up the delicious fruit blends that customers order everyday. If a server adds too many blueberries to a shake, the difference in taste is barely noticeable. Additionally, the fruit ingredients arrive frozen, reducing the need for special storage as well as the chances for products going bad.

“The thing is, the financial statements tell you if it’s winning or losing. You don’t have to do anything else. The biggest two things are labor and produce. If you can maintain those two items, you are on your way,” he adds.