Jackson's Got Next? - Black Enterprise 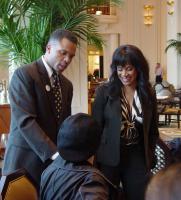 Now that Sen. Barack Obama is president of the United States, his Senate seat will be vacant. Meaning the country would gain a black president, only to lose the country’s only black senator. Illinois Gov. Rod Blagoyevich has the authority to appoint someone to serve in the position through 2010.

According to the Chicago Tribune, Congressman Jesse Jackson Jr. has expressed interest in the position and the governor is under pressure to find a black successor.

Jackson is a national co-chair of Obama’s campaign and would not speculate on the position until the election was over. Yesterday, Jackson won his 7th full term for the second congressional district of Illinois, a seat he has held since 1995. His wife, Sandi Jackson, a 7th ward alderman in Chicago, has served as campaign manager and chief political strategist in several tough Illinois state Senate and state legislative races.

Also under consideration is Valerie Jarrett, a close personal friend to Barack and Michelle Obama, and a top adviser on the campaign.

Marcia A. Wade is reporting from Chicago for BlackEnterprise.com