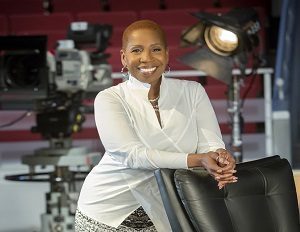 Following the death of Michael Brown and the uproar it has stirred in Ferguson, Missouri, one of our favorite spiritual life coaches, Iyanla Vanzant, has traveled to the city to speak with the people who’ve been affected most by the city’s chaos.

Stepping outside of the traditional “Iyanla: Fix My Life” format, Vanzant is taking her show to the streets of Ferguson in an effort to bring peace and healing to the community.

“My heart hurts for the family of Michael Brown and the citizens of Ferguson. In the wake of this tragic death, it is my responsibility as a mother, grandmother and teacher to show my support and to offer the community a chance to share its story with the nation. In addition, I hope to provide a set of tools to begin the healing process while also promoting peaceful change,” Vanzant said in a press release.

With what seems to be an ongoing war between the residents of Ferguson and the police, an intervention of peace is exactly what the local citizens need. No date has been released yet on when the special episode of “Iyanla: Fix My Life” will air on OWN, but we’re sure its ratings will be through the roof.

Unplug From Your Digital Device and Plug Into Your Career Potential