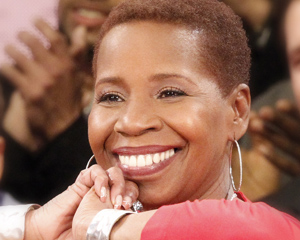 Inspirational guru Iyanla Vanzant has made quite a comeback in the last two years. First she released a new book,Â Peace From Broken Pieces (Smiley Books; $24.95), which landed on theÂ New York Times bestsellers list. Then she reconciled with Oprah Winfrey on national television where she talked about how she lost everything, including her home, her marriage, her multimillion dollar book deals, her money, and her daughter Gemmia who died after battling cancer. That public reunion paid off in garnering Vanzant’s appearance as a regular relationship expert on Oprah’sÂ Life Class television series.

Her new weekly self-help show, Iyanla Fix My Life, debuts on OWN Saturday, September 15th. This marks Vanzant’s return to television since her brief run as a talk show host back in 2001 with herÂ Barbara Walters produced series Iyanla and as a life coach on Starting Over, the Emmy-winning syndicated reality TV show. BLACK ENTERPRISE caught up with the 59-year-old author and spiritual teacher to discuss her new show and life lessons.

What is Fix My Life?

It is about giving people the tools they need to fix their own lives. I step into their lives for a brief period to look at whatever challenges they are confronting … unemployment, relationship issues, loss of dreams or hopes. We want to make the issues as common and as broad as possible so that the viewer as well as the guest can learn and heal. The problems that we have in life don’t come because there is something wrong with us but because we haven’t been taught how to make a mistake and get over it; how to make better, more loving, and more supportive choices.

Millions watched your reappearance on The Oprah Winfrey Show. What was is like to reunite after 11 years?

So how does it feel to work together again and to have a show on OWN?

I have supported OWN from day one. An African American woman owning a television network is a huge thing. Whether it is Cathy Hughes and TV One or Oprah Winfrey and OWN, as a black women it is my ancestral responsibility to be a fan, rooting for my sisters.

What is the importance of reconciliation and knowing how to step up to the plate and say “I made a mistake?â€

It is absolutely essential. It is the reason our families are broken down. It is the reason our communities are falling apart. Nowhere in our highly technological, educated society do we tell people how to get along as basic human beings and how to say I am sorry. We can contact millions of people in a minute on Facebook to talk about what is going on under someone’s skirt but we don’t know how to say I’m sorry when we made a mistake.

Your new book details enormous success and tremendous loss. How do you get over pain and loss?

You move beyond loss one day at a time, one step at a time. I always find it interesting that people categorize what we go through as pain. Pain doesn’t come from what we go through; it comes from how we go through it. Everything comes through us to help us to learn, grow, and heal. Life happens. Sometimes it is easy, sometimes it is not. We think if we work hard enough, earn enough degrees, or have enough money we will be immune to the learning, growing, healing, and opportunity. No one is immune.

After your daughter died you considered committing suicide. Had you ever thought about taking your own life before?

Yes, when I was 13 and being very dramatic; when I was 19 in the midst of post-partum depression. I don’t sit around with suicidal ideation but for me the nature of my personality is that I want to get through it or to get over it quickly. And I have learned that that
really doesn’t work.

You didn’t want to end your life but you wanted to end the pain. Is that the same for people with addictions whether it’s drugs, sex or alcohol?

Most people who have an addition don’t want to escape the pain; they want to mask the pain. There is a distinction between ending the pain, meaning you have suicidal ideations in life. You have reached the point of believing that there is nothing that can end the pain [except death]. People who have an addition have a pain–whether it is conscious or unconscious–that they cover up with drugs or alcohol because they don’t know how to deal with it.

Is it true that at one point you had Eminem as your ringtone?

“Lose yourself in the music, the moment, you own it, you better never let it go, you only get one shot, don’t miss your chance to blow, opportunity comes once in a lifetime … and success is my only option, failure is not.â€ That’s in the song. I love it and Eminem. He is a musical genius.

Are you living your life’s purpose?

I have been on purpose now for about 30 years. I write books and I teach the concepts of those books. I am a teacher and it is for that purpose I was born.

Buffalo: A Mecca for Minority and Women Owned Businesses?