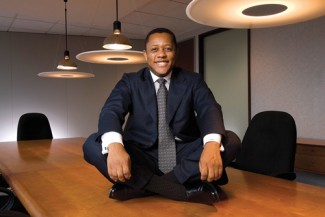 During recoveries, there’s a rule of thumb in investing: Small-cap shares–stocks of companies with a stock market value of $2 billion to $3 billion or less–often get an early jump on big corporations. For one, given their small size, the effects of a turnaround have greater impact on their results. That’s clearly been the case this time around. The Russell 2000 small-cap index gained 25% in 2010 compared to the large company S&P 500’s 13% climb. So far, the rally hasn’t slowed, with the Russell benchmark hitting an all-time high in May.

Eugene Profit, CEO of Silver Spring, Maryland-based money management firm Profit Investment Management L.L.C.Â  (No. 15 on the be asset managers list with $2 billion in assets under management), says small-cap stocks have benefited from several important trends. A round of government stimulus in the form of the Federal Reserve’s bond buybacks late last year helped. At the same time, small companies have also worked hard to cut costs and run leaner. And while Profit says small caps’ outpacing of the market may slow in the months ahead (as large-cap shares heat up), the right stocks in sectors such as technology and healthcare still have potential to make big gains. At the end of 2010, Profit’s firm launched the Profit Opportunity Fund (PROFX), a small-cap portfolio–a version of a product they have offered institutional investors for more than 10 years.

Profit, a former Yale University and NFL football player, founded Profit Investment Management in 1996 with $100,000. The firm now has grown to one of the nation’s largest asset managers. In June, Profit received the prestigious Reginald F. Lewis Award for his trailblazing success in the world of finance. He spoke to black enterprise about three of his top picks in the small-cap arena.

EUGENE’S PICKS
NuVasive Inc.Â  (NUVA) is a $1.3 billion company that makes special devices used in spinal surgery. What’s to like about healthcare? The group has put out strong earnings. NuVasive has developed an innovative “spinal fusionâ€ procedure that is less invasive than traditional surgical methods and less invasive–both plusses for elderly patients. There are signs that the company is growing market share and its return on equity is a healthy 15%. We project a long-term earnings growth rate of 22% annually. We hold a $34 price target on the stock over the next 12 to 18 months.
PRICE: $34Â  -Â  P/E: 18.81

OmniVision Technologies Inc. (OVTI) makes image chips for digital cameras, tablet computers, and mobile phones like Apple’s iPhone. The company is well run and has widened profit margins. Long-term, over the next five years, we think OmniVision can grow earnings at a 20% average annual rate. Still, the stock is trading at a rather modest 1.1 times its growth rate, in part because of competition worries. We think OmniVision’s position is strong enough to fend off concerns, and we have a 12- to 18-month price target of $38 on the company’s shares.
PRICE: $35Â  -Â  P/E: 16.79

G-III Apparel Group (GIII) is a clothing manufacturer that designs and sells sportswear, outerwear and women’s clothing for its own labels, private retail brands, and labels such as Calvin Klein. The company also operates the Wilsons Leather chain. The company is small–it has a stock market capitalization of $850 million. Its shares are relatively undervalued as well. Return on equity, however, is a strong 21% and we foresee a long-term growth rate of 18% for the stock. Consumer discretionary stocks such as G-III will get a boost from the upturn in the economy. We target the stock to rise to $54 a share in the next 12 to 18 months.
PRICE: $43Â  -Â  P/E: 15.10

3 Ways to Get Your Warranty Extended for Free