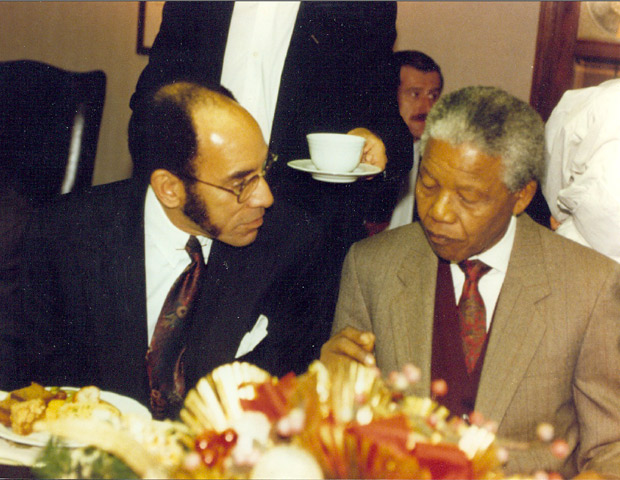 "The new South Africa needs us. To be specific, if a truly, multiracial state will grow out of apartheidâ€™s ashes, it needs contributions of African American skills and financial resources. That was the message President Mandela delivered to a gathering of prominent black American business and political leaders when he visited BLACK ENTERPRISEâ€™s offices a year after he gained his freedom. Black America has created, sustained and grown its own businesses and sent executives to the nationâ€™s largest corporations. South Africa needs this knowledge."

Today, July 18 marks Nelson Mandela International Day, in honor of the former president of South Africa and Nobel Peace Prize recipient who died Dec. 5, 2013 at the age of 95.

The day also is also a celebration of Madiba’s birthday, and is the first time Nelson Mandela International Day is being celebrated since he died.

The day was unanimously approved in 2009 by the U.N. General Assembly. It was created to honor Mandela and as an inspiration to others in recognition of the former South African president’s contribution to the culture of peace and freedom.

A statement on the UN website says, “For 67 years Nelson Mandela devoted his life to the service of humanity as a human rights lawyer, a prisoner of conscience, an international peacemaker and the first democratically elected president of a free South Africa.”

On Dec. 4, 1991, less than two years after his release from 27 years of imprisonment, black South African hero Nelson Mandela visited the New York headquarters of Black Enterprise. His purpose: to meet with America’s most powerful African American business executives, entrepreneurs, and leaders.

Inside the executive boardroom at the Black Enterprise headquarters, Madiba said, “We asked for this meeting because of our desire to learn the principles and strategies of economic empowerment for blacks in our country. Until we have a very strong business class, it is going to be difficult for us to make real progress.”

Black Enterprise founder and publisher Earl G. Graves Sr., who met with Mandela personally, wrote in an article, “In so many ways, the triumph of Mandela was and remains a victory for all of us as African Americans and, indeed, anyone in the world yearning for justice and freedom from racism and oppression.”

Mandela spent 27 years in prison, before being released in 1990.

He was buried in Qunu in the Eastern Cape. The casket lay in state for three days for public viewing.

An auction is ongoing in Johannesburg for items signed by the anti-Apartheid icon.

The Jesse Owens Story Being Made Into a Movie