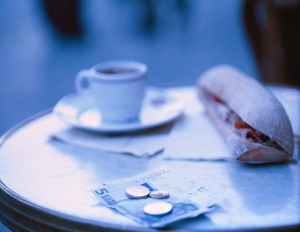 The Root's study showed distinct differences when it came to race and reasons for tipping (Image: Thinkstock)

When African Americans dine out, the service had better measure up if the server is expecting a good tip.

That’s among the findings of a recent poll by The Root on attitudes and habits regarding tipping.

Hotel Housekeeper Tells Magazine of Her Encounter with Strauss-Khan

The Sofitel hotel housekeeper, who accused Dominique Strauss-Khan of sexual assault, is going on the record. She recently gave a long and tearful interview, with her full name and picture attached, that provides her detailed account of the May encounter – including that Mr. Strauss-Kahn told her “You’re beautifulâ€ as he attacked her.

(The Associated Press) Black activists Cornel West and Tavis Smiley are planning a 15-city “Poverty Tour” to bring attention to the needy and to what they say are the failings of President Barack Obama.

West, a Princeton University professor, and Smiley, host of a TV talk show, expect to begin the bus trip Aug. 5 at a Native American reservation in Wisconsin. With visits to soup kitchens, housing projects, farms, families and low-wage workers, they say they hope to create momentum for large-scale job creation programs and put poverty on the 2012 election agenda.

LinkedIn Launches Button That Lets You Apply for Jobs

LinkedIn just made it easier to apply for a job, thanks to the launch of its new “Apply With LinkedInâ€ button.

The business-oriented social network is billing the new feature as “the future of job applications.â€ The company’s goal is to make the job application process as simple as a click.

Commitment: Are You Doing What It Takes to Succeed in Your Career?

Leaders of the New School: Opening Doors to New Opportunities