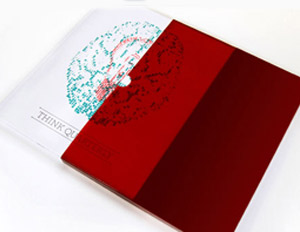 Today Google, Inc. released the first issue of its limited-edition quarterly, Think Quarterly, based out of the UK.

The full-length online magazine is only available to the corporation’s business customers and features business and technology based articles on a Flash app. It’s edited and designed by the East London based creative agency The Church of London. The 68-page book contains the in-depth article style you’d find in major pubs such as BLACK ENTERPRISE, BusinessWeek or Salon. The articles are written by a wide-selection of freelancers and contributors, including Simon Rogers, editor of The Guardian’s Datablog, and Ulrike Reinhard, editor of WE Magazine.

The company released this statement about the launch:

“Like most companies we regularly communicate with our business customers via email newsletters, updates on our official blogs, and printed materials. This short book about data was sent to 1,500 of our UK partners and advertisers.â€

Christopher Maurice “Chrisâ€ Brown issued an apology during an appearance on BET‘s 106 and Park last night for his backstage meltdown Tuesday, resulting in a trashed dressing room and broken window, according to a Good Morning America representative.

The 21-year-old R&B artist decided to “let off steamâ€ after ABC anchor Robin Roberts questioned Brown during an interview about the restraining order set against him by former girlfriend Rihanna. The court order was in response to Brown’s assault of the Baijan pop singer two years ago.

Brown and his camp are claiming they submitted talking points to the show, which ABC News denies, and when Roberts asked about the incident the singer was thrown off.

“Any time we have a guest here on the program, we let them know ahead of time the subject matter, the topics that we’re going to discuss and we, even right before the interview, I said that to Chris and I was shocked like everybody else was,â€ Roberts said today on GMA.

Brown has been invited to return to the morning news program and is strongly considering the offer, according to the network.

POLL: Are You Optimistic About the Future of Small Business?

Winging It: F.A.M.E Costs. Will Chris Brown Ever Be Willing to Pay?