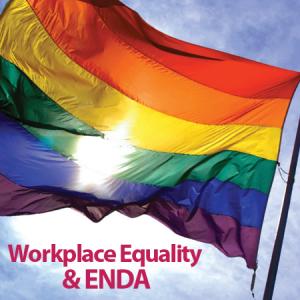 In a bipartisan vote, the Senate on Thursday passed “historic” legislation, the Employment Non-Discrimination Act (ENDA), aimed at outlawing workplace discrimination against lesbian, gay, bisexual, and transgender Americans. ENDA now faces an uphill battle in the House, where Speaker John Boehner (R-OH) has signaled his opposition.

Senior House Republican aides say the bill is unlikely to come up in the chamber for a vote, as they believe existing law already provides these protections.

ENDA would prohibit discrimination on the basis of sexual orientation or identity in hiring decisions for businesses with more than 15 employees.

“Law makers who oppose ENDA have argued that it hurts businesses, but we know that this is far from the truth,â€ says Aisha C. Moodie-Mills, Senior Fellow and Director of the FIRE InitiativeÂ at the Center for American Progress. “In fact, a vast majority of small businesses support ENDA and know that they attract the best talent when they have fair employment practices.â€

According to the national advocacy group Small Business Majority, about 6 in 10 of small business owners believe nondiscrimination policies boost bottom lines by attracting the best and brightest employees, gay or transgender. And two-thirds of small businesses believe there should be state and federal laws that prohibit employment discrimination against LGBT people.

Moodi-Mills adds that 90% of Fortune 500 companies have inclusive non-discrimination policies like ENDA on the books.

“So, anti-gay law makers can no longer hide their bias behind businesses, and have no excuse to continue to promote discrimination against LGBT people in the workplace.”

“America’s business community has long outpaced our nation’s growing acceptance of equality for LGBT people. The reality is that business owners like Apple CEO Tim Cook have known for a long time what everyone else seems to be slowly discovering: “people are much more willing to give of themselves when they feel that [they] are being fully recognized and embraced.â€ “When LGBT people are empowered to be their most authentic selves, both in and out of the office, you gain a happier, more productive, workforce,” she added.

Earlier this year, NBJC created the Many Faces One Dream LGBT Economic Empowerment Tour for Communities of Color, in partnership with the U.S. Small Business Administration. The national 13-city tour serves as an innovative approach to creating sustainable economic opportunities in LGBT communities of color.

“With ideas and talent, many LGBT men and women are creating and leading their own companies, many of them small businessesâ€ says Lettman-Hicks.

But even as more companies have adopted non-discrimination policies, harassment of gay, lesbian, bisexual, and transgender employees continues to be pervasive, as summarized in a 2012 paper by the Williams Institute at the University of California Los Angeles School Of Law. Studies over the past decade have found that LGBT people tend to be paid less than their straight colleagues, have less access to health insurance, more often feel that they were fired or denied promotions, and often hear disparaging commentsÂ based on their sexual orientation, even if they’re not out at work.

Public opinion about workplace protections for LGBT people has shifted rapidly, with majorities of Americans from all walks of life presently supporting ENDA. Majorities of voters in every US state and in every political party also support ENDA: Republicans, 66%; Democrats, 81%; and Independents, 74%. And people of faith are clearly behind ensuring basic fairness for American workers, with majorities of every Christian denomination supporting the passage of ENDA.

Bravoâ€™s Version of the Black Brady Bunch, The Tankards, Debuts