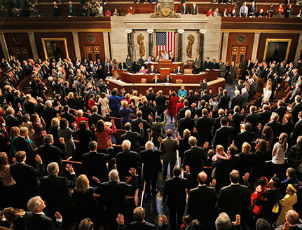 Poor John Boehner — the Speaker of the House of Representatives can’t get his Republican members to think with one mind on anything but abortion.

That was clear on Thursday, when more than a quarter ofÂ Republicans voted with Democrats to defeat a billÂ overhauling the nation’s food and farm programs, the New York Times reports.

And it was all (or mostly) because Republicans wanted deeper cuts to the nation’s food stamp program and the Democrats objected. Fight, fight, and fight. That’s all they did:

“This trillion-dollar spending bill is too big and would have passed welfare policy on the backs of farmers,â€Â said Rep. Marlin Stutzman, a Tea Party Republican from Indiana, after the bill failed.

“[Republicans] took a bipartisan bill and turned it into a partisan bill,â€ said Rep. Steny Hoyer, a Democrat from Maryland. “It’s unfortunate for farmers, for consumers and our country.â€

Do nothing, Congress. Do nothing.

Back to Basics: How to Embed Your Instagram Video