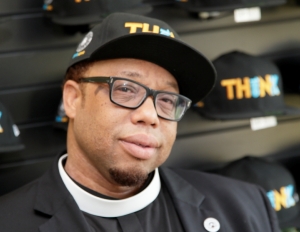 Hip-hop, at times,Â is all about conscious awareness; not only when it comes to social justice, but also environmental issues. The Hip-Hop Caucus teamed up with the 100% Campaign to unveil a limited edition New Era branded THINK 100% baseball cap, designed to support the clean energy movement. The cap features a powerful THINK 100% image on the face, designed to remind us all to think about the daily choices we make to bring about the world we want, according to it creators.

The THINK 100% fitted cap was created by five-time Grammy award-winning producer and Hip-Hop Caucus Director of Arts and Culture, Malik Yusef (Kanye West’s Late Registration, My Beautiful Dark Twisted Fantasy, The Life of Pablo);Â Hip-Hop Caucus President and CEO Rev. Lennox Yearwood Jr; and actress, model and singer K.D. Aubert. All proceeds from the THINK 100% sales will fund the movement to get affordable, clean energy to 100% of people.

“Hip-Hop Caucus and People’s Climate Music are proud to have partnered with the 100% Campaign and New Era, as we continue to work with communities, businesses, city and state officials nationwide to transition to 100% clean energy,â€ said Rev. Lennox Yearwood Jr., president and CEO of the Hip-Hop Caucus, in a statement.

“This THINK 100% cap visually represents Hip-Hop Caucus values beyond 100% clean energy; we advocate for 100% equal rights and communities that are 100% free from violence and police brutality. This thinking cap is for 100% of people who give 100% to the movement, for a better, more sustainable future.â€

The cap design was unveiled at New Era Headquarters in Buffalo, New York, at a launch party featuring performances from Yusef and acclaimed hip-hop artist Biz Markie. The limited run of the THINK 100% fitted cap will be available starting Monday, July 18 online at 100.org/shop.

“We hope that people wearing and seeing the cap will be inspired to take action so that everyone can live in a healthy, safe, and sustainable community, especially those most harmed by pollution and violence,â€ added Sarah Shanley Hope, executive director of the 100% Campaign.

Sen.Ted Cruz: No Endorsement, No Love at GOP Convention