Hereâ€™s How Apple Will Save the Planet With 'Angry Birds' 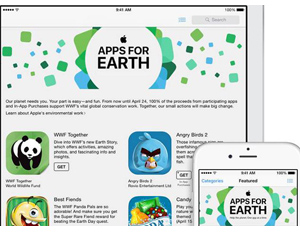 In a Medium blog post,Â Apple’s vice president of Environmental, Policy, and Social Initiatives, Lisa Jackson, along with Carter Roberts, president and CEO of World Wildlife Fund, detailed how the apps would contribute to environmental protection efforts:

With Apps for Earth, we’re helping to inform, engage and involve millions of people in global environment efforts through the fitness, education, entertainment, and gaming apps they use every day.

And we hope that for many, this is just the first step toward taking even bigger action in their communities and around the world to help the planet.

Within each app in Apps for Earth, is content that “highlights the value of conserving the world’s forests, oceans, fresh water, and wildlife, while addressing the dual threats of unsustainable food production and climate change,â€ explains the post.

One example of such content is new trivia questions concerning nature and conservation in the popular Trivia Crack app. Another–users can build a wildlife habitat to protect an endangered species in the SimCity BuildIt app.

The post also cites some troubling facts about the environment and the planet:

Apple has led the technology industry in sustainability action. Its data centers are powered by 100% renewable energy. It also uses its own custom line of robots to remove the tiniest parts from old iPhones so that the parts can be re-used.

4 Ways to Make Sure Your Company Pays Women Equally