Head Start And It's Long-Term Impact 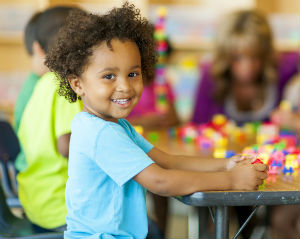 When my son, David, was less than 2, he and I attended a Mommy and Me program not far from our house. When he was a little more than 3, we enrolled him in a Montessori school.

I remember my husband asking me, “Do you think this preschool is going to make any difference?â€

It was hard to think it would. Our son was so little, and most of the time the kids in his class were just playing. “No,â€ I answered my husband confidently. “I don’t think so.â€

I couldn’t have been more wrong.

Research has consistently shown that early learning environments can profoundly influence a person’s later development, and not just academically.

Adding to this body of research is the Hamilton Project’s recently completed economic analysis of the long-term, even generational impact of Head Start, the federal preschool program that has also been shown to improve health outcomes.

I found it pretty astounding that a quality preschool experience could affect how adults would invest in their own children. Yet, that is what the Hamilton Project found: Former Head Start participants grew up to incorporate more quality aspects of interacting with their own children than did those who had not attended Head Start.

The Hamilton Project developed an index of quality parenting practices comprising the following:

The Need for Preschool

Head Start, of course, is not without its critics. But it has its supporters as well. In Oklahoma, one of two states that provide universal preschool, a study of the Tulsa Head Start found clear, long-term, academic benefits to kids who had participated in the program, as reported by NPR.

Unfortunately, African American boys did not see those benefits, and the psychologist doing the research, Deborah Phillips, told NPR that she and her team “are digging very deeplyâ€ to find out why.

Write Your Own Ticket to College Admissionsâ€”and Success