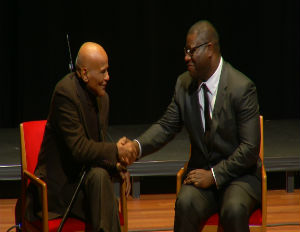 On November 17, 2014, influencers in television, film and leaders from the civil rights era gathered for an evening of celebration at the Andrew Goodman Foundation Hidden Hero Awards Honoring the 50th Anniversary of Freedom Summer.

Held at the NYU Skirball Center for the Performing Arts in New York, civil rights heroes Bob Moses, Dave Dennis, and former Atlanta Mayor Andrew Young were presented with Freedom Summer Visionary Awards for their participation in the civil rights movement. Following the presentation of their awards, these visionaries were joined by leading youth activists of today. Moderated by Master of Ceremonies, John QuiÃ±ones of ABC News, the two generations of social justice leaders discussed voting, Ferguson, civil rights issues and what needs to be done today and in the future to reach equal opportunity and access for the black community.

When talking about the current issues of social injustice that we face, and the cases of Trayvon Martin and Michael Brown, former Atlanta Mayor Andrew Young explained his fear for youth today.

“I’m sort of afraid for my teen grandkids because we were born to be afraid,” says Young in regards to black youth today who feel that they are in a completely safe world where they can act and maneuver through society as they choose.

Following the inter-generational panel discussion, award-winning actor, singer and activist Harry Belafonte took the stage to present film director Steve McQueen with the Media Hero Award for his work with 12 Years a Slave. In a short Q&A session, the legendary Hollywood icon and McQueen discussed the London native’s process behind making the award winning film. When asked why he chose actors from other countries to play in his film and depict black American culture, McQueen stated that he was simply looking for the best talent to play the part and that choosing non-American born actors was not the plan.

Belafonte and McQueen also revealed that they have joined forces to work together on a Paul Robeson film that will share insights about the scholar and civil rights leader’s life.

The awards ceremony was held by the foundation that honors the legacy of activist Andrew Goodman. Goodman was a 20-year-old college student, who joined Freedom Summer in 1964 alongside James Chaney and Michael Schwerner, to help African Americans register to vote. Their fight for justice led to their murder by the Ku Klux Klan, but their legacy and impact on moving the country to a place of equal opportunity lives on. With this year marking the 50th anniversary of Freedom Summer, President Obama has named Goodman, Chaney and Schwerner as recipients of this year’s Presidential Medal of Freedom award, proving that their civil rights efforts have not been forgotten.