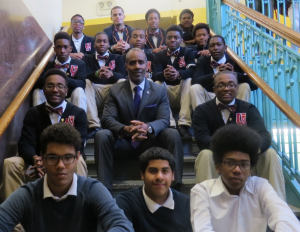 This story was originally posted on ChalkbeatÂ and written by Sabrina Rodriguez.

When Leo Herrera is at School for Excellence, a small high school in the Bronx, it can be hard to concentrate.

[Related: Chicago Principal Tells How She Got 100 Percent of Her Graduates into College]

But when he’s at SAT prep or debating with peers in a classroom at Medgar Evers College in Brooklyn, he’s more focused than ever. Herrera is part of a city program designed to send black and Latino male students to college. And not just any college: selective, four-year schools, perhaps out of New York City altogether.

“This program is completely different than my school,â€ Herrera said during an SAT prep session one Wednesday this summer. “In my school, I personally have distractions that take me off sometimes. But luckily I’ve got these guys that always keep me on track and remind me where I want to go.â€

The program is called Urban Ambassadors, and is focused on a small group of promising students handpicked from high schools that don’t typically send many (or any) students to selective colleges. The students then get academic tutoring, help with college applications, and one-on-one mentoring,Â and are surrounded each week by a very motivated group of peers.

The result is something like the Posse Foundation scholarships, which send low-income students to colleges in groups, but for college preparation. So far it’s had impressive results: Of the program’s two groups of graduating seniors so far, 22 of 27 in the first cohort enrolled in college, according to Ainsley Rudolfo, the program’s director. This past year, 26 of 28 students enrolled at colleges, including Syracuse University, Middlebury College, Brandeis College, and Drexel University.

“We know that black and Latino boys tend to look at their peers in particular for college,â€ Rudolfo said. “So our thought with the program was, could we develop these young men that are all about college? And would their peers then follow them and say, ‘I want to be like them’?â€

To get into the program, which is overseen by the Department of Education’s equity and access division, students must qualify for free or reduced lunch and have at least a 2.5 grade point average, then go through an application process and interview. Rudolfo says they aren’t necessarily looking for a school’s top academic performers, but they are looking for dedication and charisma.

Its students commit to an intensive schedule over their junior and senior years of high school. Herrera has spent his summer weekdays at Medgar Evers, and will continue to spend his Saturdays with the group for two years. The students visit colleges, get special leadership training, and prepare to take the SAT together in December of their senior year.

On a recent Wednesday, students were preparing for a debate about whether the Common Core standards help black and Latino students. More than 20 rising juniors from across the city were discussing whom they would impersonate–President Barack Obama, Rev. Al Sharpton, or Chancellor Carmen FariÃ±a. (Kellon Garrick, a rising junior at Urban Assembly for Law and Justice in Brooklyn, asked if choosing someone who is lesser known, like Diane Ravitch or the police commissioner William Bratton, could qualify him for extra credit.)

The goal, Rudolfo explained, is to give students a better sense of what has shaped their own education.

“We’re learning about how the system affects us so we can make informed decisions,â€ Garrick said.

The program was founded in 2012, in partnership with Hip Hop 4 Life, a youth empowerment organization, just months after the city launched the Young Men’s Initiative, designed to increase college- and career-readiness of black and Latino young men in the city.

Urban Ambassadors is too small to tackle more than a corner of that problem, and its first students are just now entering their sophomore year of college, making it too early to tell whether the program will succeed in helping its students surpass the roadblocks that keep many similar students from graduating. In 2010, the college graduation rate for Latino male students was 10% lower than the national average for male students; for black males, it was 22% lower.

But as the city has started high schools and funded anti-violence programs through the Young Men’s Initiative, Urban Ambassadors fills a different gap, helping students with academic potential who are already in high schools that can’t offer the same kind of sustained, one-on-one guidance.