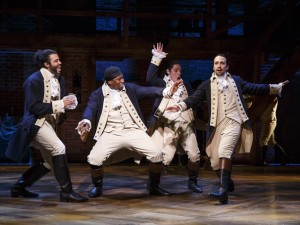 Hamilton, the Broadway smash hit of the season has been awarded the 2016 Pulitzer Prize for Drama. The Pulitzer Prizes have awarded the best in journalism and literary arts since 1917. Hamilton the musical tells the story of how an orphan emigrant from the Caribbean rose to the highest ranks of American society, as told by a young African American and Latino cast.

[Related: Whoopi Goldberg Opens Up About Her Most Important Money Lessons]

Lin-Manuel Miranda wrote the book, music and lyrics for the show, in addition to starring in the title role. He joins a short list of Latino writers–playwrights and lyricists–as winners. Nilo Cruz won this honor in 2003 for his play Anna in the Tropics, while Quiara AlegrÃ­a Hudes won the 2012 Pulitzer for the play Water by the Spoonful. She also was a finalist for Elliot, A Soldier’s Fugue in 2007, as was Kristoffer Diaz for 2010’s The Elaborate Entrance of Chad Deity.

Five African American writers received Pulitzer Prizes for drama, with two honors going to August Wilson for Fences in 1987 and Piano Lesson in 1990.

It’s rare for a musicalÂ to the win the drama prize over plays. The most recent musicals to snag the Pulitzer were the 2010 show Next to Normal and 1996’s Rent. Only nine musical have won in all,

According to Deadline, Miranda released this statement: “It is a tremendous honor to even be considered for this very prestigious award. Quiara [Alegria Hudes] and I were elated to have been recognized as finalists forÂ In The Heights,Â so to win today forÂ HamiltonÂ is beyond my wildest dreams. This award is for everyone who has been a part ofÂ Hamilton‘s six plus year journey. To be the ninthÂ musical to ever win the Pulitzer Prize for Drama in its 100 year history is truly humbling for all of us.Â  ForÂ HamiltonÂ to now be in the same company asÂ Of Thee I Sing,Â South Pacific,Â Fiorello!,Â How to Succeed in Business Without Really Trying,Â A Chorus Line,Â SundayÂ in the Park with George,Â Rent, and most recentlyÂ Next to Normal, is outside of our own comprehension. Look at where we are. Look at where we started.â€

The show, infused with rap, is based on Ron Chernow’s biography Alexander Hamilton, and is set to become one of the biggest blockbusters in Broadway history. It has been hailed by politicians and partisans of both the right and the left for its portrayal of America’s immigrant “foundling Founding Father.â€ Alexander Hamilton was the country’s first Secretary of the Treasury. The show also has brought into the spotlight a figure best known for being killed by his arch-rival Aaron Burr in a duel.

The Pulitzer win could be the first of many victories for Hamilton. It won a Grammy for best musical theater album. It is highly anticipated to sweep at this year’s Tony Awards. The original Broadway cast album is a best-seller. Hamilton also has been grossing roughly $2 million weekly since its premiere last August and is sold out for months. It’s even been added to the New York City public schools curriculum.

Lifestyle Trade-offs That Will Boost Your Savings