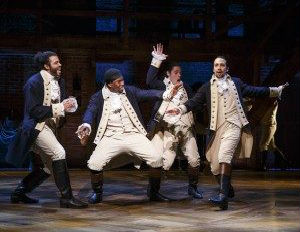 A new block of tickets for the Broadway smash hit Hamilton will go on sale this month. Pre-sale tickets will be made available exclusively for AMEX Centurion/Platinum Card holders starting at 9:59 a.m. (ET) June 12, reports Playbill.com. Tickets will go on sale to the general public at 8 p.m. (ET) June 12, coinciding with the opening of the 2016 Tony Awards broadcast.

The new block of tickets covers January-May 2017. The new tickets are priced at $179-$199 face value. Tickets for 2016 have been priced at $139-$199, but are all but sold out. In the meantime, tickets for July 9, 2016, which has been reported as Lin-Manuel Miranda’s final performance, are being hawked by resellers for up to $9,998 on Ticketmaster. The production has not confirmed that date as Miranda’s last.

The high price tickets are nothing new for the sold out show. According to CNNMoney, the cost of tickets have more than doubled to a starting price of $1,592, Friday on the ticket selling site StubHub. Prices zoomed a day after The Hollywood Reporter said that star and creator Lin-Manuel Miranda was leaving the production on July 9. The highest asking price that CNNMoney could find on the site for the July 9 night show is $9,975 for a second row seat in the orchestra. The retail price for tickets range from $85 to $300, but were selling on StubHub for $772.

Miranda’s camp has declined to confirm that the star, who plays Hamilton, is leaving on that date. Hamilton, a hip-hop musical about Founding Father Alexander Hamilton and the American Revolution, has long been the toughest ticket in town.Â Hamilton the musical tells the story of how an orphan emigrant from the Caribbean rose to the highest ranks of American society, as told by a young African American and Latino cast.

Miranda wrote the book, music and lyrics for the show, in addition to starring in the title role. He joins a short list of Latino writers–playwrights and lyricists–to win a Pulitzer Prize. Hamilton also has won a Grammy Award for best musical theater album. It has been nominated for a record-breaking 16 nominations at next week’s Tony Awards.

Miranda has already proved he has some sway when he lobbied Lew to keep Hamilton on the $10. Hamilton will remain on the front of the $10 bill, but it will be redesigned with a woman on the back, in 2020. Replacing former President Andrew Jackson on the $20 bill will be Harriet Tubman. That conversation shifted thanks to the popularity of his smash Broadway hit.