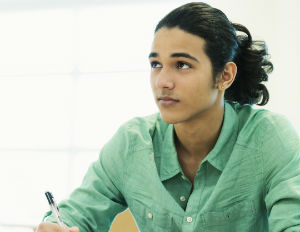 Most of us have seen the sticker, “If you can read this, thank a teacher.â€ But how many of us owe our very livelihoods to the intervention of a caring, persistent–even intrusively supportive teacher?

Anthony Ramos, who originated two roles in the smash Broadway hit phenomenon Hamilton, may think he does. According to New York Teacher, he has called a Brooklyn, New York, high school teacher “the angelâ€ who saved his life.

Ramos has since left the Broadway musical, Lin-Manuel Miranda’s powerful interpretation of the life of Alexander Hamilton, a Founding Father of our country, based on the best-selling biography by Ron Chernow.

From Baseball to Musical Theater

At New Utrecht High School, Ramos was a star baseball player who wasn’t much interested in musicals. On a lark, he tried out for the school’s SING production and caught the ear of Sara Steinweiss, a high school English teacher and alum of New Utrecht who had founded the school’s theater program as a high school senior.

According to New York Teacher, Ramos says of Steinweiss, “She showed me the path. She’s the angel in my life who believed in me.â€

Steinweiss was struck by Ramos’s “angelic voice,â€ but the young man didn’t see himself in the theater. Steinweiss practically had to force him.

“I was not the easiest person to wrangle,â€ recalls Ramos, who was raised by a single mother in a Bushwick housing project. “I was lost in school, trying to figure it out.â€

When his college baseball plans didn’t work out, Ramos wasn’t sure what to do next, but Steinweiss did.

According to the article, Steinweiss helped Ramos complete his application for the American Musical and Dramatic Academy, an intensive two-year performing arts conservatory in Manhattan. When Ramos balked at the $50 application fee, Steinweiss wrote out the check.

Ramos was accepted. But the steep tuition presented another barrier. Undeterred, Steinweiss drew on a connection with a scholarship organization founded by Jerry Seinfeld, New York Teacher writes. She made a call and arranged a meeting for Ramos–who was soon awarded a full scholarship. He later graduated from the program.

According to New York Teacher, “This is why arts are so important in the public school system,â€ an emotional Ramos told the City Council on March 22, 2016, as he was presented with a proclamation heralding his success as a public school alumnus. “Sara and the arts truly saved my life.â€