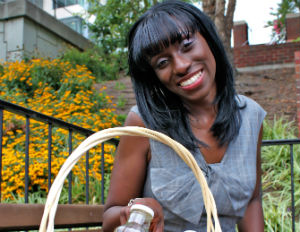 La’Tila Abbott was complimented often for her long thick hair as a child, but then it started to fall out and that traumatic circumstance was the catalyst to her entrepreneurial ventures. At 16, she got diagnosed with alopecia areata, an autoimmune disease that causes the body to attack its own hair follicles, which results in hair loss on the scalp and elsewhere on the body. It’s an unpredictable and cyclical condition that varies in severity.

Abbott underwent years of treatment for her condition (namely painful steroid shots by doctors) and she began looking into alternative health practices, which eventually lead to her “aha momentâ€ in the words of Oprah.

“Instead of going to the doctors all the time, I decided to try to fix myself and make myself better so I started investigating different procedures and herbal mixtures to put in my scalp and how to eat properly so that I could reverse what was going on internally,â€ says the Virginia native.

The mother of two never found a definitive treatment, because there is no cure for alopecia, but still enjoyed the benefits of healthy eating so much, due to noticing increased energy and less hair falling out, that she continued being selective about her food choices. Her favorite part of clean eating was the discovery of juicing, which was part of how Juicy’s Flavor, was created.

“Me, my mom and my sister were at a health food store one day back in 2007, and they had a juice bar that we went to often,â€ says Abbott. “One day we went and we noticed that the juice went up in price and I felt that I could just start doing that myself and sell it for less.â€

Initially, Abbott considered opening a juice bar but didn’t have access to proper funding, so she learned the ins and outs of pasteurization, bottling and sterilization and took a shot at making her own beverages by utilizing licensed kitchens at local churches.

“One day my sister poured her lemonade in my apple juice by accident and I drank it and liked it, and that’s how we have ‘Apple-Ade,’ which is the first flavor from my company that was created.â€

Abbott tested her first batches of Juicy’s Flavor on co-workers, who bought drinks for $2.00 a bottle and liked it enough to keep asking for more. At the time, she was working full time as a sales rep at a major phone company, where she met the investor who would help advance her business because he saw the potential in her product.

Today, Juicy’s Flavor can be found in 42 stores including Whole Foods up and down Mid-Atlantic states like Pennsylvania, Maryland, Virginia, as well as in Ohio and Kentucky.

“The business was officially registered in 2009,â€ says Abbott whose investor joined her family operated company in March 2012. “He’s good with numbers, projections, spreadsheets and some other things I’m not savvy on. It’s stuff I’m learning but I only have so much time to learn a lot, so it’s always good to have someone who can bring something to the table besides their money.â€

Abott hasn’t quit her sales rep job just yet but she has been able to significantly reduce her hours to part time. Thanks to the help of her husband, mother, sister and father, she has been able to implement marketing plans and even travel to other states to spread the word about her product and to secure placement.

“There was this one store that I went into about five or six times before someone said they were going to pick me up,â€ reveals Abbot. “I usually just go in, ask for the decision maker an give them a sample. If they like it, they’ll give me a call back and if they don’t like it or don’t call me back then I just kept going in there. You have to be persistent and keep going until someone tells you no. If they don’t say no then keep knocking.â€

The next steps for Juicy’s Flavor are finding big enough distribution so that she can get into more natural food markets nationwide, and working on new flavors for the brand. In addition to Apple-Ade, she’s tweaking a recipe for Carrot Orange and plans to introduce three new yet to be named flavors before the year is over.

“I would hope that I’m able to do this full time within the next 12 months but you can see so much money come in and out of your business bank account but it’s not all yours, so that can be unpredictable. By the time you’re finished paying yourself, you’re back to square one and any profit that you may get you might want to put toward something else for your business,â€ Abbott says. “It’s a work in progress and it takes time. You have to be passionate about whatever service or product you’re selling because if you’re not passionate and you don’t see the money coming in then you’re gonna give up.â€

In addition to her interest in using better ingredients in food, Abbott, who uses all fresh fruit and 100% organic unbleached cane sugar, cites her young daughters as inspiration to keep going when the business gets rough.

“I like to watch every ingredient on every label because a lot of ingredients that are found in foods are edible plastic, it’s just there to keep the product on the shelf for the longest time to increase profit, not for good healthâ€ she warns. “I want my children to consume better food because it can have a lasting affect on their lives to adulthood. That’s why, I make my business work for me and not the other way around.â€

Are You Buying into the Madness of Apple’s iPhone 5?