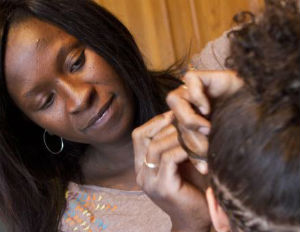 A Utah woman who braids hair to supplement her family’s income has won a federal lawsuit against the state over its licensing process for her craft, arguing state regulations violated her right to earn a living.

A federal judge ruled this week that the state’s requirement that Jestina Clayton get a cosmetology license to braid hair was “unconstitutional and invalidâ€ because regulations are irrelevant to Clayton’s profession.

Clayton, 30, sued last year after she found it would be illegal to run a hair-braiding business without a license, in part because of public health and safety concerns. Clayton said she learned how to braid hair as a 5-year-old in her West African home country of Sierra Leone, and she was doing it at her suburban Salt Lake City home to support her three children – ages 7, 5 and 1 – while her husband finishes school.

“I’m excited. I can’t believe it,â€ Clayton said of the ruling. “You go in with the hope, but sometimes things don’t go your way.â€

Gabby Douglas Honored With Mural In Her Hometown