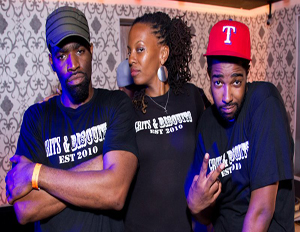 The reputation of the Grits & Biscuits party precedes it. Announced randomly via Southern-culinary-themed fliers, and catering to those with an ear for music from the “Dirty Southâ€ and no fear of perspiration, Grits & Biscuits is a jam-packed, no-frills affair where, as a recent email blast put it, “you are able to recite 2 Chainz lyrics with… professional people without being judged.â€ Behind the event is the trio partygoers known as E.Z.Mo Breezy: Erika Lewis, 37, and brothers Alzo, 35, and Maurice Slade, 26, who hail from Raleigh, North Carolina, Tallahassee, Florida and Houston, Texas, respectively. While Grits & Biscuits parties are markedly carefree, E.Z.Mo Breezy takes what they do very seriously.

Erika and Alzo cooked up the idea for the party after realizing that there was a void of Southern music at events in New York. Maurice, who moonlights as DJ Square Biz, rounded out the group by coming on as “the minister of music,â€ as Alzo puts it. The innovative trio wanted the name of the party to epitomize their beloved home region of the U.S. “We wanted something that immediately when you heard it, you thought about the South,â€ says Erika. The first party was advertised through just an email blast, a Facebook invite, and word of mouth. Every party since has been sold out, attracting everyone from doctors, attorneys, and media professionals to Jay-Z, BeyoncÃ©, and Solange.

Grits & Biscuits celebrates its two-year anniversary this weekend, offering an additional party on Friday, July 27, after the Saturday, July 28, event sold out in four days. That will make nine Grits & Biscuits parties thrown in New York; there have also been two in Washington, D.C. The trio has been able to establish their novel brand in less than two years, attributing their success to remaining authentic, putting patrons first, and playing for the team.

Stay true: Erika, who Alzo credits as the “brains and strategic operational armâ€ of the crew, says that they didn’t know the majority of the people who showed up at the very first party. “But I think that they might have connected with what we were offering,â€ she says. “From day one, we’ve always tried to be very authentic in everything we give, so we’re really giving ourselves when you come into [what is] kind of our house.â€ Erika adds she and her partners are proud of where they’re from, and stay true to themselves and what they are representing: an aspect of the South. “Our audience understands where we’re coming from, [and] they know that by coming in, there’s no judgment,â€ Erika says. “It’s really just a place where you can be true to who you are, have a good time, and then go back to work and be about your business on Monday.â€

Know yourself: While she hasn’t faced any major challenges as a woman on the party promoter scene, there are times when Erika feels she needs to add “the female perspectiveâ€ to E.Z.Mo Breezy’s conversations. “I’m fortunate that my partners respect my opinion and respect my perspective,â€ she says. “Sometimes I win and sometimes I don’t.â€ For Grits & Biscuits, Erika handles all venue relations and sponsorship opportunities, and assesses the party crowd throughout the night. She stresses the need to have a “strong business selfâ€–especially for women–and know what you want to offer your patrons and how you want to present yourself to prospective venues and vendors. “You just have to have a very strong sense of self,â€ says Erika, who is a director at Scratch, a boutique consulting agency under Viacom. “You can’t compromise who you are and what your values are.â€

5 Tips for Renting Your Vacation Home 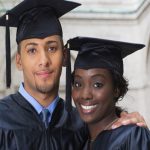