Five Career Tips From Episode 5 of VH1's 'The Gossip Game' 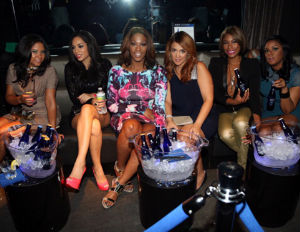 VH1’s The Gossip Game follows seven urban media professionals, as they navigate their way through the New York entertainment industry. From Hot97 to The Source magazine, these women are on top of their game. However, there is a lot to be learned from how these women interact with each other both personally and professionally.

Each week, the ladies of The Gossip Game never fail to keep their fans thoroughly entertained, and last night’s episode became quite emotional as professional lines were crossed and personal lives were hurt with Viv’s family life at the forefront of it all. So from home to the office, here are five business tips from episode 5 of The Gossip Game.

The entertainment industry can be quite demanding, so it’s easy to get caught up on a story, doing research or responding to hundreds of forgotten emails, but at the end of the day your computer, iPad or cell phone aren’t keeping you warm at night. Balance is everything in this business. Without it work will always consume you, but it’s like the saying goes, “You know it’s time for a promotion when your social life goes up in smoke.â€

It’s called The Gossip Game for a reason, and “It’s all about the rumor,â€ Kim pointed out on last night’s episode. People will always be around to talk about you, even if it’s just to get hits for a “rumoredâ€ story, but you have to have the stomach to handle it. And when it comes to the rumor, reaction is everything. A public outburst or elitist tantrum can ruin you, and once you’re ruined, it’s time for a new career field.

Radio personality Steph Lova made an appearance on last night’s episode of GG, and many people weren’t too pleased with her when she decided to mention Viv’s kids in a verbal battle. Everyone takes shots and low blows, but people’s families, especially children, are always off limits. Steph may not admit what she did was wrong now, but she’ll surely realize it later.

4. Associate Yourself With Productive People

If you’re trying to make it in this business, don’t try to work with people that aren’t liked or respected–it won’t get you very far, no matter how many people know their name. Climbing the entertainment ladder is like trying to become the popular kid in school: if you sit with the wrong people at lunch you’ll never make it to the top.

Companies may be around, but that doesn’t mean they have money. In this business, it’s hard to find people who will always pay your for your work. Sometimes it’s just about the hustle. If you put in work now, the benefits usually come later.

9 Savvy Ways to Conquer a Workday of Chaos