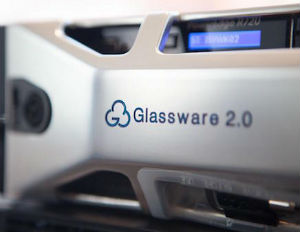 Our applications mean everything to us. Whether you use Oracle, Microsoft Office suite, or some other popular software specific to your industry, getting your job done is impossible without them. Imagine how much more you could accomplish if you didn’t have to be chained to a workstation just because it had the software you needed. Using container technology, Sphere 3D‘s Glassware 2.0 has made that scenario a reality.

“To be able to deliver commercial enterprise solutions in the cloud means you no longer need a data center, since Microsoft has one of the largest cloud infrastructures in the world,” says Eric Kelly, CEO of Sphere 3D Corp. “They’ve put more than $15 billion into it, and they have a vast network of data centers around the world.”

Virtualization can be explained simply. “Whatever your favorite application is, think about putting it inside of a container. Once inside, we are able to move that application to any device virtually without rewriting the code or changing any of the application or functions, just as if you were using it on your workstation,” explains Kelly.

The Glassware 2.0 platform will be useful in helping schools save money as more districts embark on digital learning.

“Whether they use a Chromebook or an iPad, we have the ability now for students to have custom educational software [such as those used by prep kids for standardized tests],” explains Kelly, whose company recently rang the NASDAQ bell to celebrate their one-year anniversary of going public. “Also, schools have a lot of lag. They may be one, two or three generations behind because they don’t have the money to upgrade software. Now they can use the latest versions of software on old platforms, which is a tremendous savings for them. Schools don’t have to use the most expensive tools as long as they have a device–no matter what device it is–and they are able to get on to a cellular network. There are also teachers in Africa, or in rural locations, who want to get access to the latest educational software. Now, they can do it too.”

Glassware 2.0 can also be a life-saver in the healthcare industry. For example, if a radiologist is on vacation or out of the office and a patient needs him to look at an MRI, the physician won’t have to go to a workstation or PC to give a diagnosis. With Glassware 2.0 he can view medical imaging applications from the cloud on an iPad, iPhone, or any device, as long as he has a cellular connection.

Microsoft and Sphere 3D have been showcasing its technologies and product solutions during a joint global partner roadshow hosted at multiple Microsoft Technology Center locations. The MTCs are collaborative environments, currently located in 37 major cities around the world.

Your School’s Financial Aid Office is Still a Resource