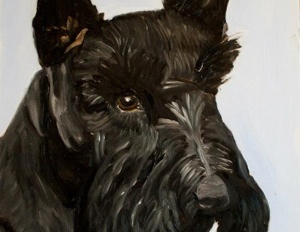 In Romania, the hacker famous for disseminating photos of former President George W. Bush’s self-portraits was sentenced to four years in jail on Friday.

According to the Guardian, Marcel Lazar Lehel, also known as the hacker “Guccifer,” hacked into various politically important peoples’ email addresses and used the access to reveal personal documents, photos, and other compromising information. Lehel, 42, was a former cab driver in Arad, Romania.

Romania’s Directorate for Investigating Organised Crime and Terrorism arrested him in January 2014 after his leaked photos of the president’s artwork surfaced in February of 2013.

How did he do it? Most of the time, it was by answering simple security questions. Lehel found answers online using sites like Wikipedia and searching the Web for the rest. Because of him, Colin Powell was forced to deny the claims of him having an affair with Romanian European parliament member Corina Cretu in 2013.

The 30 Most Heartfelt #YesAllWomen Tweets You Should See