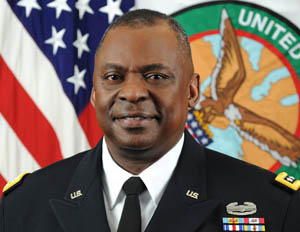 On Monday, Sept. 22, the U.S. and its allies in the Persian Gulf launched a series of airstrikes in Syria aimed at reducing the ranks and decimating strategic bases of the militant group ISIS, also known as ISIL.

ISIS, or theÂ Islamic State, is the militant jihadist group responsible for the beheading of two American journalists and a British aid worker. The group is also accused of committing multiple atrocities across the Middle East.

That much we know. What a lot of folks don’t know is that the man leading the charge to destroy ISIS in the Middle East is Gen. Lloyd J. Austin III, an African American from Thomasville, Georgia.

Austin has served in a wide variety of command and staff positions throughout his 39-year career.

According to the Department of Defense, Austin was commissioned an infantry second lieutenant in 1975 upon graduation from the United States Military Academy at West Point.

A heavily decorated military ace, Austin holds a bachelor of science degree from the United States Military Academy, a master’s in education from Auburn University, and a Â master’s in business management from Webster University.

According to Business Insider, he is the “combatant commander” of operations through his role as the Commander of U.S. Central Command.

As CENTCOM commander, Austin reportedly oversees the U.S. military presence in 20 countries in the Middle East, Central Asia, and Southeast Asia, which means Austin is leading the military operations in Syria and Iraq and heads strategic planning for the efforts to fight ISIS and the militant group Khorasan in both countries.

RELATED: Black Mt. Rushmore: What African American Leaders Are On Yours?

Here’s how White House spokesman Josh Earnest puts it. “The president was briefed on the plan that had been developed when he was at CENTCOM by Gen. Austin and other military leadership,” Earnest said. “The following day is when he gave the authorization to move forward with those strikes. And at that point, it shifted to the discretion of the commander, Gen. Austin.”

Austin was chosen to lead CENTCOM last year. He replaced Gen. James Mattis, who reportedly was Â pushed out because of disagreements with the Obama administration regarding Iraq.

The New York Times says, “Unlike several of his predecessors, General Austin has kept a low profile. He shuns the limelight, largely avoids engaging in politics and seldom speaks to the press, often declining interviews. In an age when many generals tweet and blog, he most certainly does not. That seems to have helped his career.”

He folded the tent in Iraq at the end of 2011 when the Obama administration failed to reach a deal with Baghdad to keep a small military contingent.

He’s been quoted as saying he didn’t want his race to become a focus. The general is too classy to blow his own horn, so we’re doing it for him.