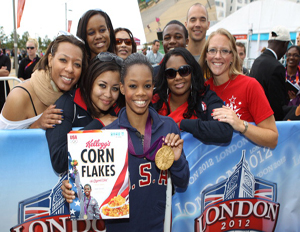 Although Gabrielle “Gabby” Douglas‘ Olympic journey came to an end on Tuesday after the Virginia Beach-bred gymnast faltered from the balance beam competition, her opportunities are far from over. Â As the first American ever to win the team gold and the all-around gold in the same Olympics, Douglas’ captivating Thursday-night performance singled the star out as a gymnast in a league of her own, as well as a sought-after athlete for upcoming endorsement deals and brand opportunities.

When Douglas made the team, Olympic sponsor Proctor & Gamble finalized a last-minute deal with the young starlet, while Kellogg’s signed her to a cereal box. According to Dan Migala, founding partner of marketing firm Property Consulting Group,Â Douglas could earn as much as $10 million in endorsement deals.Â  The gymnast is a multicultural marketing dream–with her roots in Virginia, and a brief Iowa upbringing. She’s the perfect endorser for family orientated products and brands with middle-American values. She has captivated a global audience and viewers can’t ignore her steadfast drive. It’s evident that her years of hard work, sacrifice and sweat have ultimately paid off.Â  Her robust brand can be seen off the mat and in the homes of viewers all over the world (thanks to the Olympics social-media shift).

Conversations on social media have really taken off since the start of the Olympics. NBC reports over 1 billion views across all of its platforms, which includes interactions on computer, mobile and tablet devices, with 4 days still remaining in the London 2012 Olympics. If social media is any indication of Douglas’ influence, then the young Olympian is in the lead, raking up 647,000 comments the day she received her medal. Her performance garnered 38,000 tweets per minute. In addition, she is NBCOlympics.com‘s “Most Clicked Athlete.â€ The young starlet accumulated 18.27 million views.

Douglas even acquired more than twice as many page views than fellow Olympic gold medalist Michael Phelps with 18.27 million views versus 7.0 million views. During the Phelps-Lochte race, the tweet count was 25,000 tweets per minute. Â That was 50% less than during Gabby’s performance.

Social media platforms give viewers a bird’s eye view into what is normally inaccessible. The same goes for individuals. Don’t wait to read an article on what Douglas is getting into; if you are not following the gold medalist, be sure to connect with her on Twitter and Facebook.