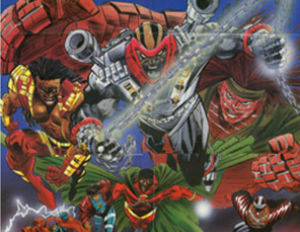 For our final edition of our first reading series for the summer, #FridayReads, Black Enterprise represents for all of you who enjoy nothing more than ‘geeking out’ over comic books.

Black Enterprise Tech Editor,Â Samara Lynn, is right there with you. This list is for readers after her own heart.

A story about dramatic upheaval in Wakanda and the Black Panther’s struggle to do right by his people as their ruler. The indomitable will of Wakanda — the famed African nation known for its vast wealth, advanced technology and warrior traditions — has long been reflected in the will of its monarchs, the Black Panthers.

But now the current Black Panther, T’Challa, finds that will tested by a superhuman terrorist group called The People, that have sparked a violent uprising among the citizens of Wakanda. T’Challa knows the country must change to survive.

Everyone’s favorite scoundrel gets his very own series! Han is given a top-secret undercover mission for the Rebellion —rescuing a number of informants and spies. His cover for the assignment? Only the biggest and most infamous starship race in the galaxy!

Loki is many things — god, trickster, brother, liar, son, villain, even hero. Now he wants to add one more thing to the list: President of the United States. That’s right, the God of Lies has set his sights on becoming the ruler of the free world.

Continually threatened by bullies and ignored by girls, Virgil Hawkins led a dismal and depressing life. But when a mutagenic gas accidentally gave the African American adolescent superhuman abilities, Virgil was reborn as Static Shock, the electrically-powered teen super-hero.

Missing any must-reads from this list? Let us know in the comments below.

5 Ways to Carve Your Own Career Path