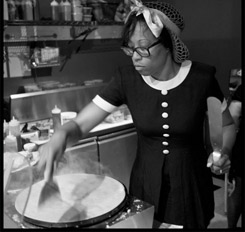 Inspiration can come from the strangest sources. In middle school, Torya Blanchard got caught shoplifting and received a stern scolding from her mother, who said, “Only good girls go to Paris.â€ The idle threat worked as the Michigan native had always dreamed of visiting the City of Love. Staying on the straight and narrow, Blanchard’s parents eventually funded their daughter’s first trip to Paris and the experience changed her life. Graduating from Wayne State University, Blanchard went on to teach French at Consortium High School, a Detroit charter school. Then, in 2008, the free spirit had an epiphany; she wanted to bring a bit of Paris to her hometown by opening up a creperie.

“Everyone tried to stop me… Everyone at my job, everyone thought I was nuts. No one thought this was a good idea,â€ says Blanchard, 32, who made crepes for fun in her spare time. “But you know how you just have these feelings in your gut?â€

Blanchard became fixated on opening up her own shop until July 2008 when she quit her teaching job and cashed in her $20,000 401k fund to open Good Girls Go To Paris Crepes. Originally located in a 48 sq. ft. space that once housed a hot dog stand, the business was an immediate hit, garnering word-of-mouth buzz and success within its first year despite being launched during an otherwise crippled Midwest economy. “I knew the first year at best would be a wash,â€ says Blanchard. “But I tell all of these people starting businesses in Detroit, start small and make an impact.â€

That she did. Three years later, Good Girls Go To Paris Crepes is now a full restaurant housed in a 1,000 sq. ft. space with a pleasurable French ambiance. With three staff members under her employ and over 50 different crepe variations on the menu–ranging from meat-filled and flavored cheese to fruity creams–Blanchard is setting the standard for other small businesses in the area to follow. In fact, a second Good Girls Go to Paris location in set to open in the Grosse Pointe Park, a suburban part of Detroit.

“I went into a 48 sq. ft. space with my eyes on this space and other spaces,â€ says Blanchard. “Detroit is super easy to start and maintain a small business, I know everybody at the Coleman A. Young [Federal] building, everybody knows me. Now in Grosse Pointe, that’s a different animal.â€

Why I’m Not Impressed With Cory Bookerâ€”Yet

OWN Ratings a Reflection of Inconsistent Branding?