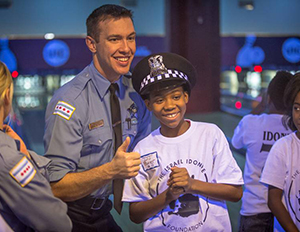 The Israel Idonije Foundation comprises five core programs, all of which aim at addressing the social and emotional development of children in need. Based in Chicago, but also serving young people in Winnipeg, Canada, and West Africa, IIF is organized around five core principles:

From Lagos to Manitoba

Born in Lagos, Nigeria, to Christian missionaries, Idonije moved at the age of 4 with his family to a small town in Manitoba, Canada, where he grew up. His parents set an example of charity and service by starting a ministry for the hungry in their area.

“We were just committed to doing what we could with the resources we had.â€

The family made soups and sandwiches and gave them to homeless people.
“I wanted to figure out what I could do with my platform being in the NFL to serve,â€ Idonije says. He had always worked with kids. Soon IIF was born. He and his team have been doing this work for 10 years.

One of the five components of IIF is Shop With A Cop, which developed after Idonije was walking in a school with several police officers. He overheard a student say, “I hate cops.â€

Idonije drew him aside and asked him why, but the youngster couldn’t articulate his reasons.

“There is so much learned behavior,â€ Idonije says.

Shortly afterwards, Idonije started Shop With A Cop, to forge ties between police officers and the children in communities they serve, to essentially create a social-emotional bond between the two by fostering relationships and facilitating communication.

In light of recent police shootings, Shop With A Cop is desperately needed.

“There are a lot of great police officers out there, but some have become jaded, so this program works for both sides.â€

The children spend a day with police officers bowling and shopping. Each child gets a $100 gift card.

“Everyone starts off guarded, but by the end of the day these guys are friends,â€ Idonije says. “It reminds the police that the young people in these neighborhoods are no different from their own nieces and nephews. For the kids to experience a police officer laughing with them, helping them with their budget–they won’t develop a hatred of cops because of what they see on TV or because of what their uncle told them.â€