For Many, High School Diploma Indicates Theyâ€™re not Ready 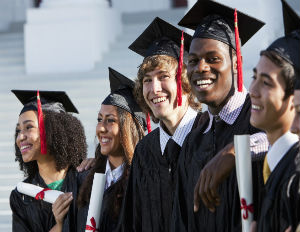 The U.S. high school graduation rate has reached a record high of 81%, but questions remain about whether or not a high school diploma represents college- or career-readiness.

We probably all know people like the brother of a young entrepreneur I met at the White House in January. Her mother had worked hard to keep her in private schools, where she got an excellent education that equipped her to excel in college.

In contrast, her step-siblings had attended neighborhood schools, and even as a youngster she noticed how little was required of them in comparison to the demands on her.

Sadly, her brother did go to college, but, unprepared, dropped out. She told me he now works in janitorial services.

His low-skill, low-status job may indicate that not only wasn’t he ready for college–he wasn’t ready for a fulfilling career either.

Although historically black colleges are known for meeting students where they are academically and bringing them up to where they should be–and I was pleased to write recently about an exciting program at Johnson C. Smith University–shouldn’t we be asking if things really need to be this way?

A report recently released by the Education Trust asks that same question. A high school diploma should indicate college- or career-readiness, yet for a plurality of graduates it represents neither.

According to the Education Trust analysis, just 8% of high school graduates pursued a course of study that prepared them for both college and career; 31% pursued a college-preparatory curriculum, and 13% studied a career-focused course. Fully 47% pursued what the report calls a curriculum that is not “cohesive.â€ How can it be that meeting high school graduation requirements doesn’t equip students to take the next step?

“Schools can’t let students get caught in the gap between qualifying for graduation and falling short of postsecondary preparedness,â€ the report states. That is exactly what is happening.

The data suggest that instead of schools providing cohesive learning experiences that prepare students for postsecondary success, the report states, high schools are prioritizing the accumulation of credits.

Students accrue credits to meet an arbitrary standard set by their high school, but they are not graduating having mastered their course of study. Who demonstrates mastery? Not students of color. Of those who completed a college-preparatory curriculum, 51% of black students received a 2.5 GPA or higher (what the Ed Trust considered signifying mastery), compared with 63% of Latino students and 82% of white students. How To Avoid One-Sided Business Relationships

4 Ways To Get Money For Your Business â€“ Which is Right for You?