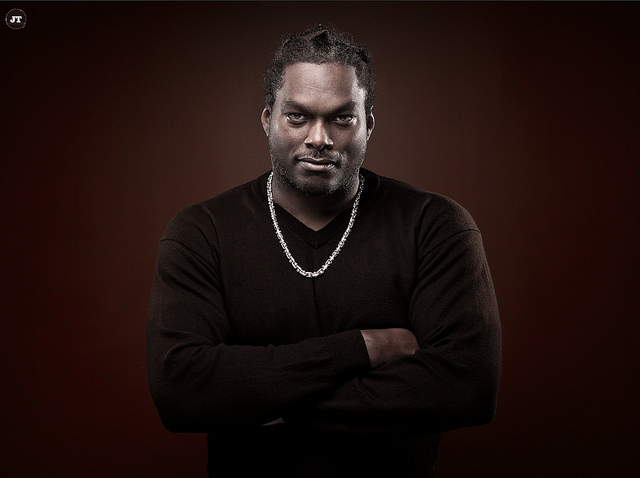 Under Armour’s story has always been LaVar Arrington’s story. It was in 1998 when as an all-American linebacker at Penn State he seemingly took the company’s slogan — “Protect this house!” — to heart and helped the Nittany Lions to an undefeated season at Beaver Stadium. Theirs was the same as a pro: Arrington, to the dismay of many, left his Nike endorsement to join Under Armour. And now, the two have paired again; an official coach for the Under Armour All-American game, Under Armour is a chief sponsor of Xtreme Procision, Arrington’s effort that is nothing short of a new paradigm for the way the game of football is played, perceived, taught and coached.

He calls it his way of giving back, but transformation was first the way of Arrington’s parents, a narrative taken right out of a play by August Wilson: His mother was a 30-year veteran of Pittsburgh Public Schools. His dad was a preacher. So for all of its recent shortcomings, Penn State is still home. His NFL career, while cut short, was groundbreaking for his accomplishment. And to hear him tell it, XP is the future.

Now and then, Arrington says, Under Armour has been the “perfect fit.”

“Teaching culture is just what I’ve been around my entire life, living life with a purpose,” he says. “This was something that I was planning on doing if the football thing didn’t work out.”

A career full of promise is cut short

For a while though, it did. Arrington was the second-overall pick in the 2000 NFL Draft. He wore a three-piece pinstripe suit, and the indication that the Redskins wanted him was apparent: His No. 56 jersey was already made for him to display alongside his toothy grin.

Arrington missed just two regular season games in his first four seasons in the NFL and completed 21.5 sacks with 267 tackles. He made the Pro Bowl from 2001-2003. When he left Nike, he was part of a cadre of young, marketable players on the Redskins, a list that included RB Clinton Portis, WR Santana Moss, and the late Sean Taylor.

“For as hard as I hit I was never a dirty player. I delivered them correctly. I never used my head, just doing it the right way,” said Arrington. “People thought I was a freelancer. If they watched, sure, I took chances. But I wasn’t a freelancer.”

Arrington, for all of his playmaking ability, had a tougher time with the Redskins’ upper management. Much of it surrounded the alleged exclusion of a $6.5 million roster bonus in Arrington’s eight-year, $60 million-plus deal he signed in 2003.

He missed most of 2004 with an injury. He wasn’t his dominating self in 2005. He was released in March of 2006 but eventually signed a multi-year, multi-million dollar contract with the Giants, the Redskins’ hated division rival. But injuries and misfortune that began in 2004 lasted into 2006: an Achilles injury suffered against the Cowboys on Monday Night Football and a motorcycle accident in 2007 effectively ended his career. It forced him to retire before his 30th birthday.

Arrington says he was fine leaving the game, even if it wasn’t all the way on his terms.

But was he depressed?

“My wife says I went through it,” he says reflectively. “Maybe I was meaner. I don’t think I did though. I trust her word. Withdrawal.”

Through it all, Arrington never believed that he needed to come back.

“In my mind I always felt like I took education seriously, and I took my relationships seriously,” he says. “I did enough good things and didn’t screw them over. I always felt like I had enough in place that I’m fine. Sure, I took chances with my money, but I’ll be able to make money. But I worried more about what kind of family man and person I was going to become, how I was going to become better at being a husband and a dad.”

“Those are the things I concerned myself with.”

Yes, Women Can Succeed in Tech, But How Does the Uneven Playing Field Impact Their Journey?