Think Like A Man: Takes Top Spot For 2nd Week In A Row 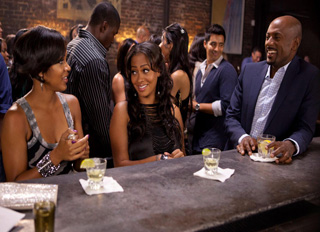 The superhero saga “The Avengers” lived up to its blockbuster buzz with $178.4 million in overseas ticket sales days before it opens in U.S. theaters.

Domestic audiences generally passed on a bunch of new films as fans seem to be in anticipation mode for Disney’s “The Avengers,” which debuts Friday in the United States after launching in 39 other countries a week earlier.

“You hope that the magnitude of this kind of opening sends a signal that this is a for-everyone film,” said Dave Hollis, head of distribution for Disney. “You can’t put up these kinds of numbers if it’s just for guys or just for the fans. These numbers say that it is for everyone, 8 to 80.”

The Sony Screen Gems ensemble comedy “Think Like a Man” was No. 1 domestically for the second-straight weekend with $18 million.

Four movies were bunched up for the No. 2 spot in the $11 million range: Sony’s animated comedy “The Pirates! Band of Misfits” with $11.4 million; the Warner Bros. romantic drama “The Lucky One” with $11.3 million; Lionsgate’s blockbuster “The Hunger Games” with $11.25 million; and Universal’s romantic comedy “The Five-Year Engagement” with $11.2 million.

Those four films were so close that their rankings from Sunday studio estimates could change once final numbers are released Monday.