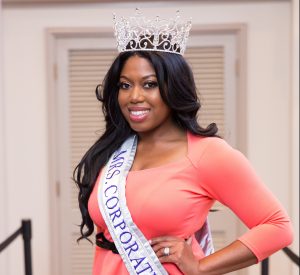 Most pageants laud themselves on the beauty and brains that contestants bring to the competition. However, the women competing for the title of Ms./Mrs. Corporate America (MCA) have to bring another in-demand trait to the pageant: business skill.

During a panel interview, contestants answer questions from a professionally diverse panel of judges, who are interested in learning more about contestants’ accomplishments, business platforms, and how they intend to advance the professional pursuits of women if they are awarded the Mrs. Corporate America crown. Each contestant only has five minutes to sweep the judges off their feet. While some women entered the interview room with sweaty palms and jittery legs, Lulu Orange Tyson brought in her most confident self, and ultimately took home the “Best in Interview” award.

Lulu Orange Tyson isn’t just in it for the crown, sash, or the glamorous prizes; her relentless drive and impressive list of accomplishments make her the perfect representation of what the MCA pageant is all about.

During Lulu’s reign, she will have the opportunity to promote her entrepreneurial endeavors, while sharing her platform of “investing in youth for a better tomorrow.” Through mentorship, community service, and empowerment, she will uphold the legacy of MCA by helping young girls reach their many goals.

Do you want to go behind-the-scenes to find out what the resume of a corporate queen looks like? Quick hint: most corporate queens aren’t just cranking away on a keyboard in the corner of their cubicle.

With this in mind, here are five facts about your new Mrs. Corporate America, Lulu Orange Tyson:

The newly crowned Mrs. Corporate America is an area admissions director and nurse liaison in Palm Beach County, FL, which serves three rehabilitation centers. She was also once presented with an “Outstanding Contributor” award, after generating over $15 million in revenue for a corporation. Lulu plans to continue her education as a licensed practical nurse, as she works to reach her goal of becoming a registered nurse.

“My mother became a certified nursing assistant when I was younger, and I got to see first-hand how she impacted the lives of seniors in continuing care retirement communities,â€ she said, during an interview. “Years later, I now work in the same environment, and I love it. When the CEO of the company I worked for appointed the first woman to head the company, I was ecstatic. It makes me confident [to know] that the work I am doing and the effort of those around me will make the glass ceiling nonexistent.â€

2. She’s a Media Maven With a Master’s Degree

Having been featured on many popular TV and radio shows, Lulu Orange Tyson is a familiar face in media. She has headlined a web TV series; hosted her own shows, such as The Boardroom TV Show and OJ in the Morning With Lulu Orange; and was even selected to give a news segment for an upcoming Miss Florida U.S.A. preliminary pageant, on WJHG News Channel 7 Panama City.

However, Lulu is more than just a photogenic, pretty face. Her accomplishments are as equally as impressive in the classroom, and she has the degrees to prove it; she’s a graduate of Florida State University, where she earned a Bachelor’s of Science in communications, and later Florida International University, where she earned a Master’s in corporate administration.

3. She Thrives During Choreography on the Football Field

Who says corporate queens can’t dance? Lulu Orange Tyson shatters all stereotypes with her versatile movement, agility, and enthusiasm as a cheerleader. As the former captain of her high school cheerleading team, Lulu developed into a quality leader and the value of discipline and teamwork–all of which are skills essential to thriving in professional environments. However, Lulu’s cheering experiences it didn’t end in high school; at the age of 28, she auditioned to become a member of the professional cheer squad for the Miami Dolphins, where she made it all the way to the second cut.

4. She Knows the Value of Sisterhood

Lulu is a proud member of Zeta Phi Beta sorority: the Beta Tau Zeta chapter based in Miami. She has served in various positions on the local level as the second vice president, in addition to serving as a state-level reporter, a business partnership chair, and as the national interim director of the Miss Zeta Phi Beta Pageant. Lulu has also been honored as Miss Florida Zeta and Regional Miss SE Regional Zeta, among others.

According to the Zeta Phi Beta, Inc. sorority website, Zeta Phi Beta was founded on the campus of Howard University in January 1920. With a membership of over 100,000 individuals, Zeta Phi Beta “seeks to educate the public, assist youth, provide scholarships, support organized charities, and promote legislation for social and civic change.”

5. She Coached the First Runner-Up of the 2017 Miss Universe Pageant

Any queen that is willing to help other women unlock their hidden potential is a woman who should be admired. To that end, Lulu has developed the organization,Â Pageant Role Models, for this very purpose. This organization empowers women to love the skin that they’re in by exposing them to industry professionals, who teach workshops on interview skills, proper etiquette, and image management.

One of Lulu’s protÃ©gÃ©s, Raquel Pelissier, was crowned 2016 Miss Haiti Universe, and eventually went on to become the first runner-up at the 2017 Miss Universe pageant. Did I mention that this was Raquel’s first time competing in a pageant?

For more information on the Ms./Mrs. Corporate America pageant, or to request to have this year’s winner, Lulu Orange Tyson, speak at your next event, please contact the pageant at www.mscorporateamerica.com.

Business Owners Need to View Their Succession Planning as Their Legacy