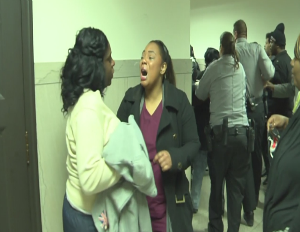 A fight broke out after a Milwaukee County judge sentenced 23-year-old Dedrick Ashford to one year in prison and one year of extended supervision on Wednesday.

Ashford had pled guilty to driving without a license causing death. He ran over a six year old, Christopher Wade, Jr. in April. The child died. It was also determined that Ashford was under the influence of marijuana.

Members of Wade’s family asked the court for a harsh sentence for Ashford, and one year in jail and one year probation wasn’t exactly what they had in mind.

After the sentencing family members of the victim became rowdy. Some were calling out “murdererâ€ as they were leaving.

Once in the hallway, a fight broke out. In a press release, theÂ Milwaukee County Sheriff’s Office said family members of the victim spotted the defendant’s brother in the hallway and ran after him, and the fight ensued.

Read more at watch the video at Newsone.

Chris Brown Off The Hook For Snatching Cellphone