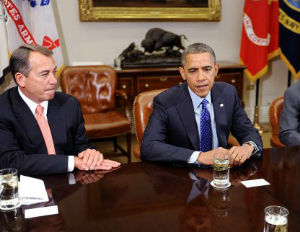 Maya MacGuineas, head of the Washington-based Committee for a Responsible Federal Budget, talks about negotiations in Washington to avert the so-called fiscal cliff of tax increases and spending cuts. She speaks with Tom Keene and Sara Eisen on Bloomberg Television’s “Surveillance.”

Lawmakers are seeking to avert more than $600 billion in tax increases and spending cuts that make up the so-called fiscal cliff. Even if a deal is reached and can get through both chambers of Congress, it would be more limited than President Barack Obama and leaders of both parties sought. It would set up another battle early in 2013 over the budget and the federal debt limit.

Some Senate Democrats expressed resistance toward an income threshold for increased tax rates that would be higher than the $250,000 they sought.