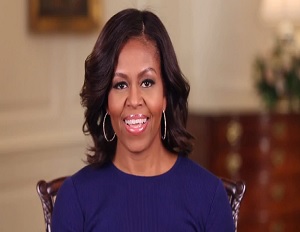 First lady Michelle Obama and daughters Sasha and Malia, visited Milan Duomo cathedral on Thursday, where they lit candles in memory of the victims of the shooting in Charleston, South Carolina, according to the Daily Mail. While in Italy, the First Lady addressed the shooting calling the shooter’s actions “horrifying and senselessâ€.

“My heart goes out to the people of Emmanuel and to the people of Charleston, said Mrs. Obama, ” I pray for a community that I know is in pain with the hope that tragedies like these will one day come to an end.â€

It’s been reported that, nine people, including the pastor, Rev. Clementa Pinckney,were killed overnight by gunman, at a prayer meeting inside the historic Emanuel African Methodist Episcopal Church, in downtown Charleston, where members gathered for a prayer meeting.

Pinckney was a pastor at Emanuel AME and according to NBC News, began preaching in the church in his teens. The 41-year-old husband and father of two also served in the South Carolina Senate and was at one time the youngest member of the state House when he was first elected at age 23.

The Associated Press reports, the first lady was visiting at the U.S. Army Garrison Vicenza, thanking hundreds of the troops and their families for their service. During the address, she made sure to reiterate the notion of “hope,â€ in reference to troops and the people of Charleston.

“I pray for a community that I know is in pain, and hope that one day tragedies like this come to an end.â€ –The First Lady on #Charleston

“Simply saying our thoughts and prayers are with you is not enough. We’ve seen too many tragedies like this.â€ –The First Lady on #Charleston