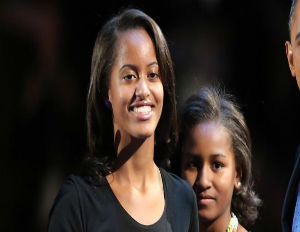 Boy, time sure does fly. Why? Well, first daughter Malia recently attended her first prom. But who her date was, that’s “classified” information.

The president was asked about it during an interview on ABC‘s “Live! With Kelly and Michael.”

Like every parent, the president was a little shocked to notice his little girl had suddenly grown up so quickly. He said, “Malia did have her first prom … I think it’s fair to say that the first time you see your daughter in heels is a little bit jarring, she’s lovely. She’s beautiful.”

But when they tried to push him to dish up more details he declined, telling them, “I think this is all classified information.”

Now it should take some extra courage for any teenager to show up at the White House and ask to pick his daughter up, but Obama begs to disagree. He insists he’s “not too intimidating.”

According to the AP, “The president said he and the first lady were worried that growing up in the White House would give their daughters ‘an attitude.’ But he expressed pride that they have remained respectful, kind, and considerate young women and gave credit to his wife.” Malia turns 16 on July 4. Her little sister Sasha, she turns 13 this month. We’ve been watching them grow since the Obamas moved into the White House in 2008.

You can check out the full interview with Kelly and Michael here.