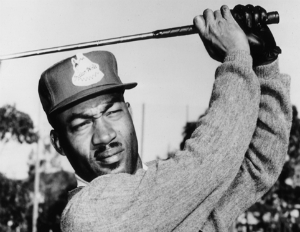 President Obama is set to award the presidential Medal of Freedom on Nov. 24 to the first black PGA member, Charles L. Sifford. Inducted into the World Golf Hall of fame in 2004, Sifford became the first person of color to compete in PGA events after the end of the “Caucasion-onlyâ€ membership clause in 1961. The presidential Medal of Freedom is the nation’s highest civilian honor. “Dr. Charles Sifford is most deserving of this special honor,â€ said PGA tour Commissioner Tim Finchem. “He is the ultimate pioneer who endured untold hardships with tremendous dignity, courage and spirit, and he is a true role model who has provided inspiration to aspiring players of diverse backgrounds. We all owe him a debt of gratitude for helping to change our sport for the better. He is a true champion, in every sense of the word

Known as the “Jackie Robinson of Golfâ€ because of his strides in breaking through golf’s stiff racial barriers, Sifford provided counsel to Robinson during his climb up to fame. His words of wisdom came from walking a path of resistance from showing interest in goals as a young boy in Charlotte, N.C.

Caddying while practicing his skills, Jim Crow laws prevented Sifford from advancing beyond gopher status. His determination to make golf dreams come true garnered death threats even after the PGA banned its Whites only clause. Today, Sifford boasts a Honorary Doctor of Law Degree by the University of St. Andrews given to him Â in 2006. And he is the third golf pro to receive the Medal of Freedom after Arnold Palmer in 2004 and Jack Nicklaus in 2005. Sifford was voted in by a panel of sporting who’s who including congressional politicians and athletes like Tiger Woods, Alonzo Mourning, Bill Russell and Jim Brown.

“The PGA of America joins our friends throughout sports today in paying tribute to Dr. Charles Sifford upon receiving this prestigious honor,â€ said PGA of America Interim President Derek Sprague. “The hard-fought efforts and perseverance of Dr. Sifford continue to inspire our industry to evolve and elevate all efforts in diversity and inclusion. We must be mindful and proactive in creating meaningful opportunities for everyone to participate in this great sport.â€

Join BLACK ENTERPRISE along with top tastemakers, entrepreneurs, executives and celebrities for the 22nd annual Black Enterprise Golf and Tennis Challenge, September 3-6, 2015, at the PGA National Resort & Spa in West Palm Beach, Florida.Â  If you’ve fantasized about a luxe, social, resort experience – where business and pleasure blur tastefully and the upper echelon of professionals come to play while enjoying top-notch amenities – then Golf and Tennis is your one-of-a-kind opportunity, visit dev.blackenterprise.com/gt/ and follow hashtag #BEGT on social media sites for the latest updates

Home Ownership Out of Reach for Many Americans