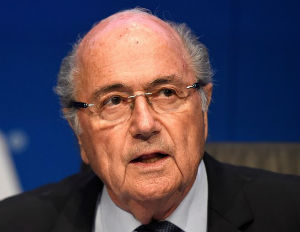 Earlier today, reports confirmed that longtime FIFA President Sepp Blatter resigned via an emergency press conference in Zurich. Blatter’s resignation follows a series of events that have rocked soccer’s international governing body – most notably the recent arrest of 14 executives and officials within the organization, and not least, the controversial election on Friday which resulted in Blatter’s fifth term as President.

Blatter’s resignation speech, available in an English transcript, offers several concessions regarding the state of the organization, in addition to proposed reforms and changes; all as Blatter calls for an “extraordinary congressâ€ to name his successor as soon as possible.

Here are a few excerpts from the speech:

“I have been reflecting deeply about my presidency and about the forty years in which my life has been inextricably bound to FIFA and the great sport of football… I cherish FIFA more than anything and I want to do only what is best for FIFA and for football. I felt compelled to stand for re-election, as I believed that this was the best thing for the organisation. That election is over but FIFA’s challenges are not. FIFA needs a profound overhaul.â€

“…I have decided to lay down my mandate at an extraordinary elective Congress. I will continue to exercise my functions as FIFA President until that election. The next ordinary FIFA Congress will take place on 13 May 2016 in Mexico City…. This would create unnecessary delay and I will urge the Executive Committee to organise an Extraordinary Congress for the election of my successor at the earliest opportunity.â€

“It is my deep care for FIFA and its interests, which I hold very dear, that has led me to take this decision. I would like to thank those who have always supported me in a constructive and loyal manner as President of FIFA and who have done so much for the game that we all love.â€

At the time of his resignation, Blatter has not been charged with anything in the seemingly rampant corruption within FIFA, however, a separate criminal investigation by Swiss authorities into how the 2018 and 2022 World Cups were allocated is currently under way.