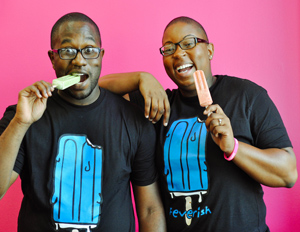 She makes sure the parents are involved, too. By organizing a panel of some of Miami’s top tech professionals, parents get exposed to the various tech professions available and can better understand the potential of their child’s interest.

Miami’s tech scene: “Outside of Silicon Valley, all major cities are starting to build an ecosystem, which is just great for us to take advantage of it now,â€ said chief popsicle. “Here in Miami, within the last two years, it really just started to take a shift with some more companies starting to come down here, more accelerator and incubator and co-working spaces; more focus on ideation and creativity.â€ Hatcher credits the large Black, Caribbean and Latino population with creating a cool, cultural ecosystem and creating technologies that directly impact their respective areas.

Starting Black Tech Miami: After years of being the only techies of color in a room, Hatcher and husband founded Black Tech Miami in 2012. The organization quickly grew and started hosting meetups and events across the city.

Building a socially-savvy biz: The pop queen admits she didn’t know exactly how to engage with customers on the company’s social media platforms at first, but quickly learned its value. In addition to engaging with customers and asking them their flavor suggestions, which is how the sweet potato pie popsicle came to be, they live tweet client events and capture photos and videos in real time. It grabs the attention of the corporate partners, retweeting and sharing their messaging regularly.

The power of social: Feverish Pops connected with DRY Soda on Twitter, which led to a signature flavor pop and DRY soda being sold in the Miami shop.

Best trait of an innovator: Problem solver. “I think essentially that’s at the essence of innovation, like solving a problem and being able to look at it from a different perspective than most normal people would be willing to look at it.â€

Color Code: What Do the Hues You Wear to Work Say About You?