BenÃ© Scarves is a Small Business With a Big Mission 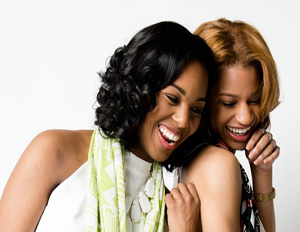 BenÃ© is not your typical clothing company. It’s where fashion and philanthropy meet.

Conceived in an effort to help educate young, school-aged girls abroad, the idea to create BenÃ© started when one of the company’s founding partners, Michelle Blue, went to study abroad in Ghana to learn more about the textiles and the culture, while participating in outreach.

Studying business marketing and fashion merchandise at the University of Georgia at the time, Blue became inspired by the young women she met while there. She recalls their strength and spirit, “Despite everything that they didn’t have or seemingly didn’t have materially, they still had such love and such a beautiful spirit. I was really amazed and really in awe of them.â€

So, she returned to the U.S., eager to share the story of those life-changing encounters with her best friend and BenÃ© co-founder Sasha Matthews, also a college student studying at Florida A&M University. After putting their heads together, they decided they wanted to do something to help those young women. But, instead of making a mere one-time donation, they wanted to create something more sustainable to make a difference. So, they decided to start a company.

Blue and Matthews thought long and hard about what they’d call their company. They wanted a name that would reflect their mission. After coming across the word, “benevolent,â€ its meaning resonated with them and they decided to use the word’s Latin prefix.

In 2013, BenÃ© Â was born, inspired by West African textiles and committed to sponsoring tuition, books, supplies and uniforms for young girls in Ghana to continue their education and fulfill their dreams.

Initially, they decided upon a clothing line, and worked ardently toward conceiving and launching a full collection of garments. But after spending some time working in New York City, exploring the garment district, meeting with pattern makers and manufacturers while also learning about clothing construction, Blue quickly realized just how much such a large undertaking required, both in knowledge and start-up capital. She says, laughing, “I realized … we don’t know anything about constructing clothes and garments. It’s very specialized … and we didn’t have the money to even start.â€

Blue and Matthews paused their business affairs and took a step back to reassess what the next realistic move would be. “We knew that the need was still there, the girls were still there, so we were still compelled to act and to do something,â€ Blue says.

3 Reasons Hiring In a Pinch Hurts Your Business

For-Profit College Students Refuse to Pay Back Their Student Loans

As the founder and CEO of The Champ Media Agency, I'm a consulting entreproducer dedicated to helping time-starved entrepreneurs execute their content strategy to nurture inspired and engaged online communities. I take the headache out of editing, social media and web content maintenance, allowing you to be successful in other pursuits. Together, when we work, you win! For more information, please visit: www.GoChampMedia.com.