Entrepreneurs Summit: 7 Facts You May Not Know About Quincy Jones 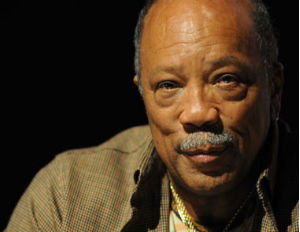 At this year’s Entrepreneurs Summit, Black Enterprise is honoring Quincy Jones with the Trailblazer Award. So much comes to mind in highlighting the career of one of music’s biggest influences—like when he made history as the first black executive of a major record company, or when he produced the highest selling album in history. But there are also those interesting facts that you may not hear about as often. See how well you know Mr. Jones.

1. He started early in music, singing in a gospel quartet when he was 12 years old and studying trumpet in junior high school.

2. In the 1950s, he was the first popular conductor-arranger to record with a Fender bass, a game-changing instrument and the first electric bass to earn widespread popularity. His number from the hit TV series Ironside was the first synthesizer-based pop theme song.

3. His Grammy-winning album Back On The Block was an inter-generational mix of artists, such as Dizzy Gillespie, Sarah Vaughan, Ice T and Big Daddy Kane, and the first fusion of bebop and hip-hop genres.

4. In 1994, Quincy Jones led and partnered with power players, including football Hall of Famer Willie Davis, TV producer Don Cornelius, TV journalist Geraldo Rivera and businesswoman Sonia Gonsalves Salzman, to form Qwest Broadcasting. The minority-controlled broadcasting company purchased television stations in Atlanta and New Orleans for approximately $167 million, establishing it as one of the largest minority owned broadcasting companies in the country. In 1999, Jones and his partners sold Qwest Broadcasting for a reported $270 million.

5. He catapulted the model of using celebrity status to raise money and awareness for a cause with “We Are the World.â€ The song remains the best-selling single of all-time and raised more than $63 million for Ethiopian famine relief. After so much attention was brought to the Ethiopian drought, U.S. government responded with over $800 million in aid.

My Black is Beautiful: Tatyana Ali and Patrice Yursik Imagine a Future