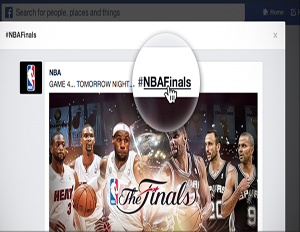 The Menlo Park, California-based company announced that it will begin rolling out the hashtag service to a small percentage of users Wednesday, but it’s expected to reach more accounts in the coming weeks.

Many users incorporated Twitter’s signature marker, the hashtag, into their Facebook content; however, it didn’t have any legitimate functionality. Â Facebook reportedly considered hashtags back in March, but didn’t make the move to centralize conversations for tracking and aggregation purposes until today.

“Every day, hundreds of millions of people use Facebook to share their thoughts on big moments happening all around them. Whether it’s talking about a favorite television show, cheering on a hometown sports team or engaging with friends during a breaking news event–people on Facebook connect with their friends about what’s taking place all over the world. …

To date, there has not been a simple way to see the larger view of what’s happening or what people are talking about.

To bring these conversations more to the forefront, we will be rolling out a series of features that surface some of the interesting discussions people are having about public events, people, and topics. As a first step, we are beginning to roll out hashtags on Facebook.â€

For those concerned about privacy, only the people you’ve shared your post with can view the hashtag feed. Hence, a hashtagged post you shared only with your friends can only be seen by them, but hashtags shared on public posts are viewable by everyone.